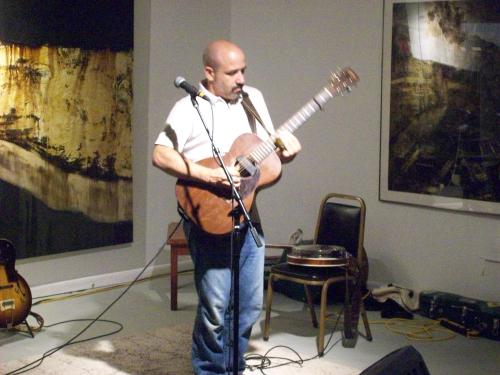 Tony Furtado took the stage at the sparsely decorated Waterloo Cafe last night for an intimate acoustic performance that opened his current Midwestern tour. It included a selection of tunes from his back catalog and many improvised moments.

Accompanied solely by his acoustic guitar, Furtado kicked off with a slow instrumental piece and followed with “Waste of the Moon,” a melancholy number he said was inspired by Wallace Stevens' poetry. The tune had a sad blues feel, with lyrics that wondered about the inevitability of death.

He then picked up a banjo for an instrumental medley that included a cover of the Beatles' “I Will” and an original tune that went into a semi-classical mode and showcased his dexterity on the instrument.

For the folksy title track from 2007's Thirteen — an original tune he wrote after a South Carolina mine disaster where 13 workers survived and 12 died — Furtado used a 1951 semi-acoustic Gibson guitar that he said he was playing for the very first time. It's a very poignant song, accented by bits of slide guitar.

Things became more playful when Furtado returned to the banjo and performed an improvised tune that included a lot of pedal effects. You could see how much fun he was having, even surprising himself with the sounds he was able to extract from the instrument and electronics.

Furtado closed his set with two Irish-tinged numbers that brought smiles to the audience that filled the small room. It was a grateful crowd, and Furtado responded with an upbeat encore. Thanks to his singular approach to music and charismatic stage presence, it was a highly enjoyable evening. Here's hoping he will return soon. —Ernest Barteldes