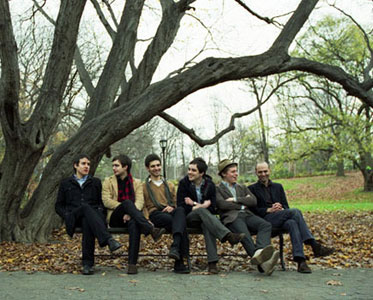 It’s not every day that you see two drummers sharing a stage with one hell of a percussion set-up. On a Wednesday at midnight to boot! Soon after the guitar fuzz cleared, White Rabbits’ dual drummers punched up their set's first song at the Grog Shop last night as their sticks hit in unison and then split into separate rhythms.

The NYC-by-way-of-Missouri band calls its music “honky tonky calypso,” drawing influences from reggae, ska and big pop hooks. Perhaps that’s an appropriate categorization, but it’s hard to draw any kind of box around this dramatically distinct sextet. When they took the Grog stage, eyes flickered from one band member to the next in hopes of catching all the action. The problem? Too much to see, not enough eyeballs.

When fans weren’t “drumming” on their thighs to “The Plot” (from the debut album, Fort Nightly), they were nodding in rhythm with the bass on “They Done Wrong/We Done Wrong,” one of the Rabbits' many songs that sound like something Spoon would record. (Spoon’s Britt Daniel actually produced the band's new album, It’s Frightening, and the groups have toured together.) The twinkle of the piano and softly distorted guitars bring solid rock to the music, with a mix of melodic sweetness and jutting edginess.

But what holds everything together is the beat. White Rabbits ended their set with “Percussion Gun,” their very aptly-named single. Alternating bursts of spastic and punchy drumming sounds incredibly catchy on the album, but feeling and seeing the intensity onstage really brought the music to life. —Danielle Sills