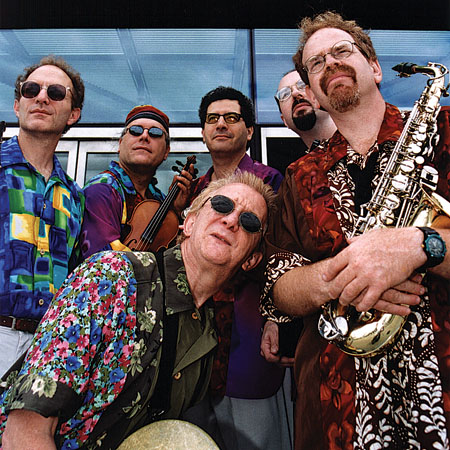 The bubbas were dancing in the aisles by the time Yiddishe Cup concluded its second set, headlining the 31st annual free Workman’s Circle Yiddish Concert at Cain Park’s Alma Amphitheater Sunday evening. Dedicating the old Jewish favorite “Bay Mir Bistu Sheyn” to Jack Saul, a stalwart of the concert’s organizing committee who died May 1, the six-man klezmer ensemble and their two guest performers, singer Shawn Fink and Hawaiian steel guitar and ukulele player Gerald Ross, kicked out the jams, Yiddish-style, complete with a sizzling trombone solo from Steve Ostrow. It capped an evening of yucks, groans (some of the jokes were terrible), sentimentality and impressive musicianship. Fink’s vocals on numbers like “Hallelujah” had a suave ripeness that could have earned him a spot in the Rat Pack. Other tunes were sung with verve by guitarist Irwin Weinberger. A distinctive klezmer version of “A Hard Day’s Night” was introduced by band lead Bert Stratton, who said “It’s in Yiddish except for ‘I feel alright’ — there’s no way to say that in Yiddish.” In mid-number, a troop of dancers clad in Afro wigs and loud bellbottoms burst on stage to add to the general zaniness. A pair of jitterbuggers augmented a swing number, and a broadly comic version of “My Yiddish Mama” featured the group’s “shtickmeister” Daniel Ducoff dressed in drag as the titular character strutting out into the auditorium followed by Weinberger, while the band worked some of ’50s hit “Little Darlin’” into their anything-goes rendition. — Anastasia Pantsios