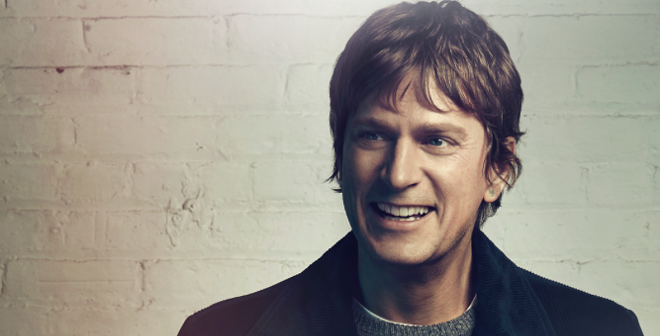 With his ongoing solo work, singer-songwriter Rob Thomas continues to unlock exciting new collaborations, including one with producer Butch Walker (the Struts, Fall Out Boy, Weezer) on Chip Tooth Smile, his newest album that was released in late April. Even though the two have been friends for quite a while, it was their first time working together in the studio after years of talking about doing it. At first, Thomas thought he was making his Nebraska, an album that would be acoustic-based. Instead, he took things in more of an ’80s pop direction. (Matt Wardlaw) 8 p.m., $85-$159.50. MGM Northfield Park – Center Stage.

Local indie rockers Harvey Pekar recorded the songs on their latest album, Paris Green, without a record deal. Produced and engineered by Ryan Foltz (Dropkick Murphys, Rancid) at Cleveland Audio, the disc draws from Cleveland punk rock and hardcore acts such as Integrity, 9 Shocks Terror and Dead Boys. The band was also recently tapped as one of four recipients of a 2019 Panza Foundation grant. After shopping the record, it inked a deal with locally based Steadfast Records, which released it earlier this month. A real scorcher, album opener "Predation in Shadow Position" features a Fugazi-like vibe as it includes a mid-song breakdown of sneering spoken vocals. "Glow Aplomb" is a bit more melodic, and a gritty guitar riff drives "Coup Ensemble." (Jeff Niesel) 8 p.m., $8 ADV, $10 DOS. Now That's Class.

Todd Sharp (in the Supper Club)

Singer-guitarist Todd Sharp grew up in Cleveland and cut his teeth playing the area with bands like E.T. Hooley, Fleet and the Maudie Barker Band. For tonight's show, bassist Mike Joyce, another Clevelander, will join him. The two used to play together when they were much younger. Tonight's show celebrates the release of his rootsy new single “Back to 1” (co-written and recorded with Stan Lynch of Tom Petty and the Heartbreakers fame) and the re-release of his 2002 album Walking All the Way. (Niesel), 8 p.m. Music Box Supper Club.

Last year, Greta Van Fleet, a young band from Frankenmuth, MI of all places, played the Agora as it came through town on an anticipated tour. The band performed with that same kind of energy that distinguished Guns N Roses back in the day and delivered a fierce 75-minute set that evoked acts such as Led Zeppelin. Expect that kind of intensity as the group returns to town tonight to play Jacobs Pavilion at Nautica. (Niesel), 8 p.m., $44.50-$54.50. Jacobs Pavilion.

Jon Spencer & the HITmakers/Archie and the Bunkers

Singer-guitarist Jon Spencer grew up in Providence where he started absorbing a mix of noise and garage rock. A late bloomer when it came to diving into rock 'n' roll, he didn’t start listening music until he was in the late teens. Spencer played in a noise rock band before moving to Washington D.C. in the '80s and forming Pussy Galore, a ramshackle garage rock band that’s perhaps most famous for issuing a cassette-only covers album of the Rolling Stones’ Exile on Main Street. The band split up in 1990 but not before leaving a lasting impression. With the Jon Spencer Blues Explosion, which he formed in 1991 in New York, he sticks with a garage rock formula but plays with a little more swagger, delving into blues, funk and hip-hop. He comes to town tonight in support of Spencer Sings the Hits, a grunge-y, garage rock-inspired solo album he released last year. (Niesel) 8 p.m., $15 ADV, $18 DOS. Beachland Ballroom.

With their 1993 debut album, Enter the Wu-Tang (36 Chambers), Staten Island’s Wu-Tang Clan showed just how sophisticated hip-hop could be. Produced by RZA, the album featured samples from Kung Fu films and had a cinematic quality to it. In fact, RZA would go to score several films, and in the wake of the debut album’s release, Ol' Dirty Bastard, GZA, RZA, Raekwon, U-God, Method Man, and Ghostface Killah would launch solo careers. The group comes to town tonight in support of 2017’s The Saga Continues, an album that features some of the same sonic qualities found on Enter the Wu-Tang (36 Chambers). (Niesel) 7 p.m. Agora Theatre.