Send a News Tip
Country singer-guitarist Eric Church has said he explicitly designed the 360-degree stage (microphone stands are positioned on all sides and the drum kit rotates as Church moves from side to side) he’s using on his current tour so that he could feel close to the audience. He has said he looks back fondly on the days when he used to play small clubs and wants to be able to feed off the audience’s energy even though he plays much bigger venues these days. That approach worked perfectly at last night’s two-hour concert in front of a packed house at Quicken Loans Arena where he drew on his rock roots to put on an energetic show. At one point, he even took a request from a fan at the front of the stage and played “Chevy Van,” a cover tune that he said he hasn’t played in years (he had to pause to remember the lyrics but he made it through without a glitch). And he regularly ran out onto the catwalks that extended onto the floor to slap high fives with patrons. He even signed a couple of cowboy boots. 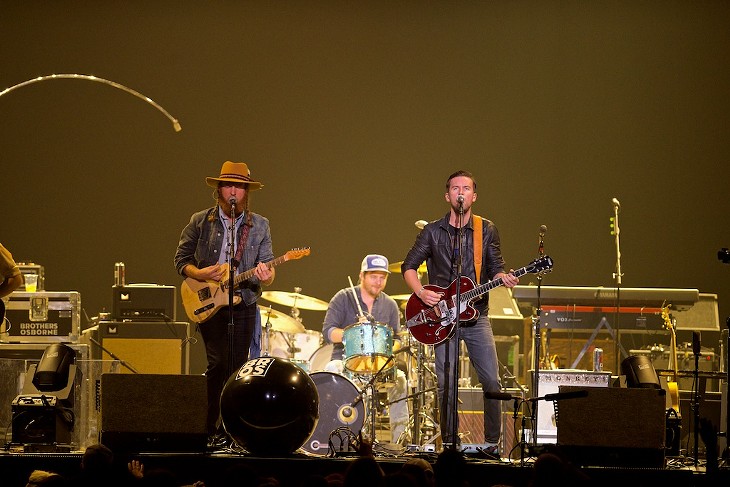 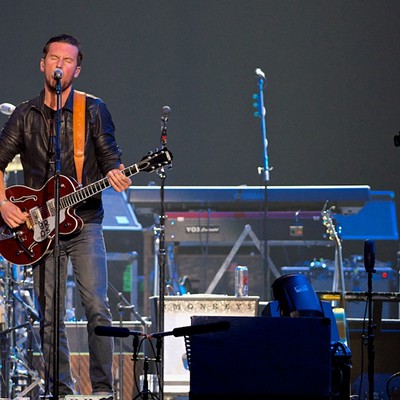 Click to View 33 slides
The lanky Church, who wore dark aviator glasses for the entire show, and his fine backing band (his two tattooed guitarists looked like they belonged in the punk outfit Social Distortion) arrived on stage as Clutch’s heavy-hitting underground rock anthem “Electric Worry” played over the public address system. It was an appropriate way to start the concert as the performance had much to do with arena rock. The drum kit (drummer included) lowered onto the stage from the ceiling as Church launched into “The Outsiders,” the vigorous call-to-arms that’s the title track from his latest album. The song started slow but ended strong as Church sang the refrain “Yeah, we’re the fighters, the all-nighters/So fire 'em up and get a lil higher” with fists raised in the air. There would be plenty of other arena rock moments. “I’m Getting Stoned” began with what sounded like a riff from a Metallica tune and “Lotta Boot Left to Fill” ended with a riff lifted from Black Sabbath. Oh yeah, and a giant inflatable devil rose from the arena floor for “Devil, Devil.”

The concert never hit a lull as Church delivered about 25 tunes. The set included rockers such as “That’s Damn Rock & Roll,” a tune he delivered with assistance from his female backing singer Joanna Cotton, and ballads such as “Sinners like Me.” “Smoke a Little Smoke” was turned into a terrific jam that had fans singing in unison (and the smell of pot wafted through the Q). Church sang a few riffs from Springsteen’s “Born in the U.S.A.” as an intro the set closing “Springsteen.” It was a nice touch, especially since Church stripped the Boss’ song of its bombastic elements to sing it as the somber reality check that it really is. Church told the crowd that he still remembers that first concert he saw in Charlotte when he was 16 years old. And he fondly recalled the taste of his first beer and the feeling he had after smoking his first joint. He brought those elements of excitement to last night’s terrific show.