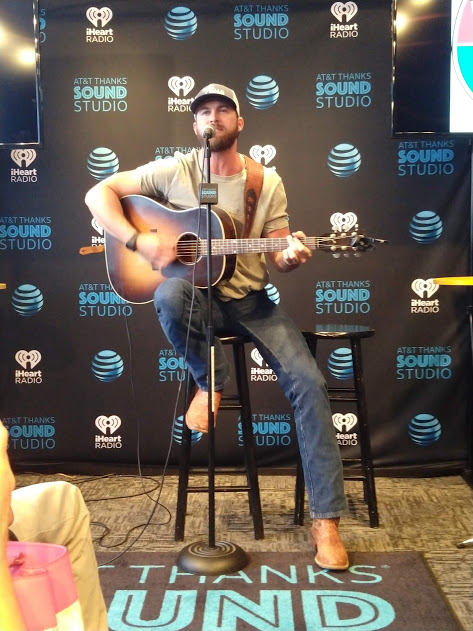 While growing up in Jacksonville, AL, singer-songwriter Riley Green picked up a few songwriting tips from his songwriter grandfather Bufford Green. Riley Green has said that his grandfather gave him an appreciation for old school country music, something that comes across in tunes such as “Bury Me in Dixie,” “A Little Hank” and “Almost.”

Earlier today, Green, who’s released three EPs and stars in two TV shows (Winner of Redneck Island on CMT and his own hunting show on DirtRoadTV), delivered a small-room invite-only “pop-up” performance in front of about 30 fans at WGAR in Independence. Part of an AT&T Thanks customer appreciation program, the concert started with a video presentation featuring concert footage and clips of Green’s music.

Wearing cowboy boots, a greenish-gray T-shirt and blue jeans, Green started his acoustic set with the title track from his brand-new EP, In a Truck Right Now. Singing “there’s freedom in the headlights” while strumming an acoustic guitar, Green capably delivered the mid-tempo song without any accompaniment.

Green then introduced “Numbers on the Cars” about his grandfather, who was a big NASCAR fan. “He always knew who drove what car and what number it was,” he said in introducing the ballad about how the man’s memory started to fade. “He might not know all the words to all the songs, but he still knows Merle Haggard’s voice when he hears it,” Green sang in his distinctive drawl.

He also debuted a radio friendly song he recently wrote with Rhett Atkins, and he essentially talked his way through the up-tempo “Same Old Song.” He concluded with “There Was This Girl,” a tune he wrote with songwriting pal Erik Dylan.

After the performance, Green participated in a Q&A. He performs this weekend at Jamboree in the Hills.