Punk's most rankled spokesmen are celebrated in the Punk Planet retrospective We Owe You Nothing. 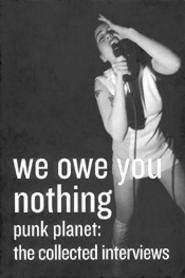 Since its birth in 1994, the Chicago-based 'zine Punk Planet has covered a music scene that's inextricably bound to progressive politics. The publication, winner of last year's Utne Reader Alternative Press Award, is the subject of We Owe You Nothing: Punk Planet: The Collected Interviews, a new book whose subjects -- musicians, political organizers, artists, and filmmakers -- make for some of the most fascinating interviews you're likely to ever read. Furthermore, the deep, penetrating nature of these discussions and the keen social consciousness on display make most mainstream acts (and the press in general) seem shallow and self-absorbed by contrast.

The fierce DIY ethic that characterizes this book also applies to Punk Planet Publisher Daniel Sinker, who began publishing and editing the magazine at age 19. Choosing from among 300 interviews, he pared his scope to 25 essential profiles, written in a question-and-answer format that Sinker rightly describes in the book's intro as being "a much more honest approach to interviews." He goes on to emphasize that "the 'featurized' interview format favored in more established rock rags usually lets you know a lot more about who's doing the writing than whom the writing is about."

The interviews, which are preceded by background info on each subject, begin with Ian MacKaye, whose former band the Teen Idles, which formed in 1979, was among Washington, D.C.'s first punk outfits. The founder of Dischord Records, one of the earliest DIY punk labels (run out of his parents' home), MacKaye, who currently plays in Fugazi, personifies the hands-on approach with which these artists conduct their business. In Fugazi's case, that includes doing its own managing, booking, and even taxes. In the process, Sinker observes, the group's rein on everything has "shown the world how to conduct business respectfully and honestly."

The artists profiled in these pages live their lives according to their own rules and ideals, and they tend to urge others to do the same. Jello Biafra, best known as the singer of the Dead Kennedys (a band Sinker praises for "providing American punk with a leftist political philosophy that transcended the nihilism, ignorance and stupidity of the early hardcore scene"), is one of them. Biafra comes across as a keenly perceptive individual who encourages social activism and self-determinism rather than "clouding their future with what their parents, teachers, and the mass media tell them to do."

Though most of the interviewees here are relative unknowns, the book features a few higher-profile artists who share how they've managed to maintain their ideals after signing to major labels or experiencing unexpected success. Sonic Youth guitarist Thurston Moore, whose band signed with Geffen in the late '80s (though it continues to put out more experimental work on its own SYR label), feels his band is "using our major label connections to our advantage." That includes taking its paycheck from the Lollapalooza tour to fund the building of its own studio and sharing concert bills with avant-garde artists to aid their exposure.

For Chumbawamba, staunch anarchists who titled their 1986 debut Pictures of Starving Children Sell Records (a reference to the popularity of the Live Aid charity concerts), the unexpected success of 1997's "Tubthumping" has merely provided a wider forum in which to disseminate its revolutionary goals. An interview with guitarist Boff, conducted at the height of "Tubthumping"'s success, finds him pondering the equal distribution of the big-time bucks set to come the band's way and savoring the prospect of giving money to "an anti-fascist organization, social center or community group."

Because the interviewers generally avoid the standard rock-star questions (e.g., tired tour stories, songwriting techniques), the reader gets thought-provoking discussions from well-informed individuals, among them collage artist Winston Smith, who uses images from '40s, '50s, and '60s magazines to express anti-capitalist ideologies and socially conscious messages. Often misinterpreted, Smith is famous for the image of a crucified Jesus set against a backdrop of dollar bills, which the Dead Kennedys used on the cover of "In God We Trust Inc." The image, Smith says, provides a commentary on the "sacrilege" of making "money our god."

We Owe You Nothing's appeal is primarily in its candid, pull-no-punches conversations. Among the most outspoken subjects is recording engineer Steve Albini (who works mostly with independent acts, but has worked with the likes of Nirvana, Jimmy Page, and Robert Plant). A vociferous critic of major labels, Albini questions why anyone, given the choice between a personal relationship with an independent label or one with a major label -- with its "well-deserved reputation for taking the money and running and crushing people's lives and careers if they put up any resistance" -- would choose the latter.

Equally blunt is author Noam Chomsky (whose book of essays, the acclaimed American Power and the New Mandarins, was a forceful argument against the war in Vietnam). He offers a withering critique of the competitive capitalist system: "They can't stop exploiting people in order to make profits, or they're not going to be in business anymore." Chomsky goes on to argue that the very nature of the system "rewards anti-social behavior or what I would regard as criminal behavior." He also discusses at length the rigors of the activist life -- an undertaking that, according to him, won't get you "the kinds of rewards that you're trained to want."

We Owe You Nothing also contains the story that generated more mail than any other Punk Planet cover story: "The Murder of Iraq." The article, a conversation with members of the humanitarian organization Voices in the Wilderness, which delivers medicine and supplies to Iraq in defiance of the economic embargo, is by far the most affecting piece here. Besides painting a grim picture of the death and hardship incurred by Iraqis as a result of the sanctions, the piece is moving in its conveyance of the dedication and sense of outrage that fuels Voices' efforts.

For those who admire dedication to personal ideals, but wonder about the sheer feasibility of maintaining an anti-capitalist lifestyle, the book addresses the issue in its final chapter, "The Failures of Punk." One of those voices belongs to Matt Wobensmith, owner of the longstanding Outpunk label and the short-lived Queercorps, who argues that "punk is in denial of how the world is." A realist at heart, Wobensmith pronounces himself "no fan of capitalism, but I know that when I don't have money in my bank account, there's no money to pay my rent, and there's no money to put out your stupid records."