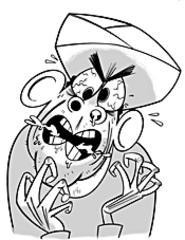 Mike Gorman
All hail Slayer! The monstrous sound of Reign in Blood inspires to this day. Unfortunately, much of what it inspires is adolescent claptrap -- like the majority of death metal. Even though most fans of this "scariest" form of music are pimply dipwads, every once in a while the music attracts a batshit loonball who takes the silliness seriously and kills someone.

This continues to be a hot topic in Italy, that land of pasta and sexual harassment, with the continuing saga of the Beasts of Satan -- a group responsible for several vicious killings. While these deaths are tragedies, there are now those in the clergy and parliament who want to ban death metal. For this foolish shortsightedness, we must issue a fatwa!

The argument is as old as music itself -- or at least as old as Billie Holiday's infamous 1933 suicide song "Gloomy Sunday." Music is never more than music. Banning Gretchen Wilson won't end Skoal use. Forbidding "Who Let the Dogs Out" won't help enforce leash laws. In the end, Italy, all you are doing is giving Deicide more press. And we all know that is a bad idea.