Dashboard Confessional Plays to a Packed House of Blues 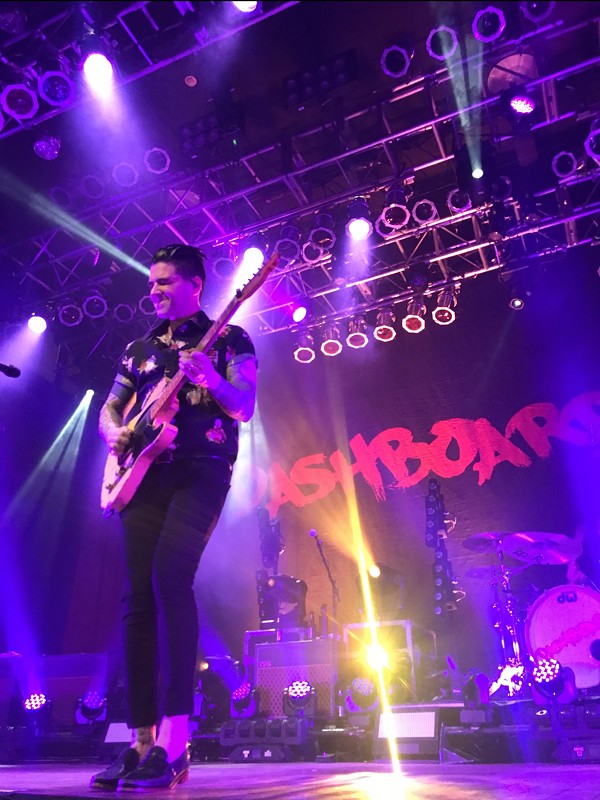 Dashboard Confessional appeared on stage last night to greet the fans at a packed House of Blues beneath a haze of amethyst and fuchsia lights. His guitar slung slightly clumsily over his small frame, frontman Chris Carrabba flashed an unassuming smile and took everyone back to 2001 by serenading the crowd with one of the band's earliest hits, “The Best Deceptions.”

It has been nine years since the band’s last album, but it seems as though time has stood still for Carrabba. His jet black hair was pushed back into a stiff oil slick to showcase his enviable youthful face. His voice sounded just as strong and drenched with just as much raw emotion as it was back in the day. Dressed in a short-sleeved button-down tucked into tailored black pants, Carrabba also wore penny loafers, which added something sweet and 1990s-middle school to his entire demeanor. It was as if he was up there giving his best recital performance while on his tippy toes half-searching for his mom in the audience. He wore no socks, and his bare ankles hinted at a subtle purity.

Carrabba is the personification of a trapper keeper stuffed full of hurt feelings and lost loves, bursting open at the seams. He doesn’t so much sing as he exorcises his emotion into a raspy high-pitched growl while sheepishly standing under a spotlight. Even though he has many tattoos, all the tattoos in the world couldn’t hide the fact that he's the nice guy, the boy next door, the one that got away. And he isn’t about to let anyone off the hook for breaking his heart — his pain is as naked as his ankles.

Dashboard fans, for the most part, aren’t casual about their fandom; they are die hard and know all the lyrics to all the songs and belted them out right along with Carrabba. Last night, it quickly became obvious that Carrabba feeds off this energy. He needs the communal sing-a-long as fuel to soldier on with the show. His clergy of fans happily screamed out the words to classics like “Saints and Sailors,” “The Brilliant Dance” and “Screaming Infidelities.”

Somehow, even new songs like “Heart Beat Here” and “We Fight” already sounded like classic Dashboard tracks. In “We Fight,” Carrabba sang the lyrics “and tried to lift the whole damn crowd up.” He mentioned once kissing a girl from Ohio, and you could feel the collective swoon in the room.

Tender moments in the night included renditions of “Vindicated” and “The Places You Have Come to Fear the Most,” which felt like pissed-off lullabies delivered by someone even more earnest than John Cusack holding a boombox outside your bedroom window. For the encore, Dashboard played its huge hit “Hands Down,” which it delivered with an intensity matched by the crowd. Carrabba once again flashed his Colgate grin as he exited the stage, leaving his fans wanting more. He remains very much the pretty poster boy for 2000s emo rock.