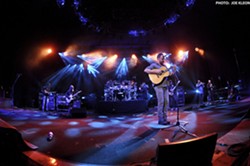 Delivering on promises made by previous setlists on this 25th anniversary tour, Dave Matthews Band threw down a high-energy show last night at Blossom. Rarities, the hits, fiery solos from Tim Reynolds: This show had it all.

Starting things off with the first show-opening "Crash Into Me" since 2007, the mood was celebratory from the get-go. With "Proudest Monkey" > "Satellite" and "Don't Drink the Water," we all realized that the band wasn't messing around tonight. This was going to be an inventive setlist, which certainly turned out to be the case.

(See a slideshow of photos from the concert.)

I was mostly hanging around the very front edge of the lawn, which we all turned into a wild dance floor. There weren't many downtempo songs during the night, so the danced flowed on constantly. And that's one of the great things about Dave shows: You meet new friends before the concert — out in the lot, etc. — and then flip those acquaintanceships into a party atmosphere on the lawn as everyone gets down. This was only my third time seeing the band, but my buddy was clocking show No. 38; he said this is how summer is supposed to feel.

The show flew through some really incredible takes on great tunes — "Stolen Away on 55th and 3rd," "Pig," "Everyday." "Ants Marching" closed out the set in its always-exciting fashion.

Then the encore, a real special treat. New tune "Bismarck" opened things up and felt so right, followed by "So Much To Say" and "Anyone Seen The Bridge." It sort of felt like "Tripping Billies" would end the show after that great trio, but then the crowd went insane as the eerie opening to "Warehouse" started up. That was the perfect end to a high-intensity show. A five-song encore. Fantastic.