Akron finds its next Idol. 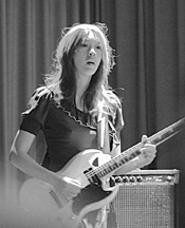 Walter Novak
Blonde Redhead's Kazu Makino, rocking the Beachland April 5.
While the country follows the battle for the next American Idol, Ravenna's Steven Thompson has moved a step closer to the title himself, edging out his brother to take top honors at the Akron Idol II competition at club Voodoo.

Thompson went neck-and-neck with his brother Rick in the eight weekly rounds that led to the March 29 finals. Despite losing the final round to his brother, Steven triumphed on overall points. His finals performances included the Eagles' "Witchy Woman" and Styx's "Babe" -- songs he had refined on the Streetsboro karaoke circuit.

Rick Thompson wowed the crowd with a passionate take on Michael O'Brien's "What Held You on the Cross." One judge described his rendition of the religious tune as "fucking amazing."

"The performance that Rick gave, for me and Jani, the hair stood up on the back of our necks," says Diamond.

"When it comes to gospel and Christian music, he's just got it. We've always been in competition," Steven says of his brother, with whom he developed his chops in the local Christian group the Thompson Family.

Akron Idol's next two eight-week sessions begin on April 5 and June 21. Competition is open to ages 14-35.

"I would definitely like to see more high school students," says Diamond. "Even though we're a rock club, we'd like to focus on all genres. We want this to be a representation of Northeast Ohio, not just Akron."

· After bouncing to Pennsylvania, Clevo death metal expatriates Incantation have gone global, inking a deal with France's Listenable Records. The band returned home in March to record its eighth album, Decimate Christendom, at the Mars Complex in Streetsboro. The disc is slated for July release; in the meantime, they'll play Germany's Fuck the Commerce VII fest, alongside acts such as doom-death greats Obituary.

· Clevo punkers the Sign-Offs are playing a showcase at Don Hill's Niteclub in New York City on April 14. The band has chartered a bus, which will leave at 8 a.m. that day. Wanna ride along? E-mail [email protected].