Different Strokes for All Folks 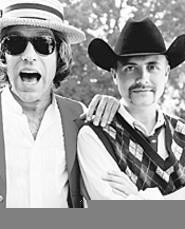 Big & Rich: The funniest, funkiest new rebels in country.
John Rich of Big & Rich -- the funniest and funkiest new rebels in country music -- likes to tell a story about his preacher dad and Mötley Crüe, a group that embodies rebellious fun (if not exactly funk) for a whole generation of heartland Americans. About four years ago, when Rich was struggling to convince major labels to give him a shot at a solo career, the Amarillo native befriended Crüe bassist Nikki Sixx at a songwriter's camp. As Rich explains by cell phone from a tour stop in North Dakota, Sixx told him, "'Man, we played Amarillo one time, way back in the mid-'80s.'

"'Yeah,' I said, 'I remember the show because my dad was dragging a cross around the Amarillo Civic Center.'

"And his eyes get all big, and he says, 'Dude, that was your dad? I was looking out the bus window with my binoculars at this guy dragging a cross around the place; it had me freaked out the entire time I was onstage!' So I'm hoping to set up a phone call between Sixx and my dad at some point."

If John Rich (pictured right) and his partner "Big" Kenny Alphin have a mission -- and they do -- it's exactly that: to set up meetings between Americans who normally never face one another, except across division lines. In a way, that makes these Nashville iconoclasts more radical than the "insurgent country" acts favored by many redneck-scorning blue-staters. Hank Williams III, to take one prominent fave, likes to get down and dirty by promising to "put the cunt back into country." Big & Rich know the value of getting down and dirty themselves, having achieved a modicum of pop notoriety for the bawdy, Kid Rocklike rocker "Save a Horse (Ride a Cowboy)." But mostly they want to reach everyone by putting the country back into country. That means not only the hillbilly styles that Hank's granddaddy amalgamated as he invented modern country music, but also the modern sounds of the nation as a whole.

It's made crystal clear in -- what else? -- "Rollin' (The Ballad of Big & Rich)," a basic rock stomp that opens the duo's 2004 multiplatinum debut, Horse of a Different Color. As the two harmonize in close hillbilly fashion about their mission -- "Charlie Pride was the man in black/Rock and roll used to be about Johnny Cash/What you think about that?" -- in steps Cowboy Troy, a "big black cowboy" who drops Cypress Hill-style raps in Spanish and English about "rolling with the brothers, Big and Rich."

"Big Kenny and I were both raised believing in the Bible, believing in the teachings of Jesus Christ," says Rich, as he chows down on a late lunch. "He said, 'The greatest commandment is "love everybody."' Our mission is to give everybody something positive to hang onto and hopefully, increment by increment, change people's attitude about their fellow man. And the easiest way for us to do that is to combine all these different kinds of music that we love and put them into one album, and then to present it as 'country music without prejudice.' It's like putting every color of person in the same room and making them all play dominoes for a week."

True enough, Horse of a Different Color often feels as warm and predictable as a domino game, but even the regulation Nashville fare boasts lyrics that touch upon class, spousal abuse, and murderous rage, traditional country themes that had become nearly taboo in Nashville's move toward suburban respectability. Elsewhere, the album knocks down the dominoes in a long roll, not just with rap breaks, but also with gloriously strange numbers like the improbably touching "Wild West Show," a minor-key pop ballad that features a fluttering flute and a dejected lover who's "a little unraveled, but still in the saddle." Like many of Big & Rich's best characters, he's suffering from a surreal disjuncture between his lofty dreams and his crappy reality.

As John Rich acknowledges, he and Big Kenny experienced much the same state in the six years they wrote songs together before being signed by Warner Brothers. On the one hand, both enjoyed respectable careers as well-oiled cogs in the Music Row machinery, cranking out songs for superstars like Martina McBride. But on the other, their solo debuts never made it into wide release, because Music Row considered their work simply too radical. And all the while, Big Kenny and John Rich were slowly building up an underground through a weekly jam session they called the Muzik Mafia.

"It was just a bunch of us that became friends in Nashville from going out to shows," Rich says. "You'd see a guy onstage that you thought was good. You'd go up and introduce yourself to him, and then he'd come to your show. And then after a couple years of doing that, kind of a clique formed, and it was rockers, rappers, country boys -- Gretchen Wilson was our bartender."

In 2004, a new label head, Paul Worley, broke with convention and made Big & Rich the first group he signed to Warner Brothers Nashville. At the same time, John Rich helped oversee Gretchen Wilson's debut, Redneck Woman, a lusty hoot that made Wilson the biggest female performer of the year, thus opening the door to signings of numerous members of the Muzik Mafia. And now, as they poise themselves for a fall follow-up, Big & Rich have turned their jokey name into a serious boast.

"We don't want lukewarm responses from anybody," Rich says. "We don't mind people hating us, because that's okay, man; at least they have an opinion. I think the biggest problem with music nowadays is, there are too many acts where the public doesn't have an opinion one way or the other. And those are the ones that are just wasting everybody's time. How's that for a statement? Put that in the paper!"