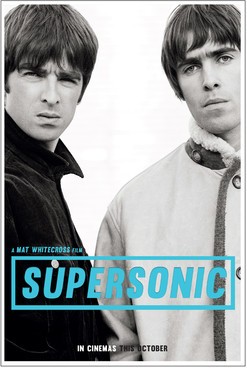 Update: As previously announced, Oasis: Supersonic! will screen on Wednesday at the Cedar Lee Theatre, but Cleveland Cinemas has just announced that the film will re-open for one week at the theater beginning on Friday.

While nothing will likely ever compare to the British Invasion of the ’60s, the Britpop explosion of the '90s certainly came close.

Bands such as Oasis and Blur competed to sell more records than one another and stay atop the charts longer. Both bands played to huge crowds as they became festival favorites.

Oasis: Supersonic!, a new documentary from the producers behind Amy, the award-winning documentary about Brit singer Amy Winehouse, revisits that time period. The documentary starts with footage from a huge festival date in 1996 and then flashes backward to show how brothers Ian and Noel Gallagher put the band together in the early '90s.

"We weren't the best musicians but we had spirit, man, and that was lacking at the time," says Liam Gallagher at one point in the movie. Noel Gallagher recounts how everything changed when the band issued "Live Forever," a tune that became a massive hit. "One great song just followed another," he says.

The two-hour film includes never-before-seen concert footage and numerous interviews. It even addresses the sibling rivalry that regularly threatened to destroy the band. It screens at 7 and 9:30 p.m. on Wednesday, Oct. 26, at the Cedar Lee Theatre.