Down on the Clowns

Esham Smith put acid rap on the map, but has had to watch Detroit's white rappers get all the glory 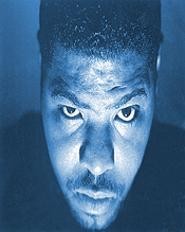 Esham: Can't take the title from ICP.
Detroit acid rapper Esham Smith gets all the respect in the world from his peers, yet he's still hawking discs out of his trunk while other Motor City hip-hop acts are filling arenas. Kid Rock, Eminem, and the Insane Clown Posse -- all from the Detroit area -- cite Smith's unique piercing vocal style as an influence, and while Smith gladly accepts the acknowledgment, he knows damn well that, without him, Kid Rock would still be in a trailer, Eminem wouldn't be working with Dr. Dre, and the members of the Insane Clown Posse would be holding down careers in professional wrestling (on a full-time basis).

"I can tell you they wouldn't have been able to make their whole albums without listening to my records," says Smith regarding his hip-hop colleagues, all of whom are white. "Take it for how you want to take it. It's still a struggle for a black artist. I'm not going to sit here and lie. It's a fucking major struggle, when the same lyrical content that Eminem has is the same lyrical content that I have. But at the same time, they won't put me up on MTV saying that shit. It's just different rules. We're all playing on different sides of the fence."

While Smith's counterparts all grew up in white-bread, Middle American suburbs, Smith spent the latter half of the '80s on the streets of Detroit, which, at the time, was the murder capital of the nation. His brother was a drug dealer, and toward the end of his elementary school years, Smith started hanging with the wrong crowd too, stealing radios and cars. Eventually, his mother sent him to live with his grandmother in Long Island.

Though he only lived in New York for a few years, Smith quickly became enamored of the unique sound of rap music, which, at the time, wasn't played on Detroit radio and wasn't embraced on the streets as it is today. In fact, Detroit radio stations promoted the fact they didn't play rap.

"When I came back, I was ready to rap," Smith says. "Everything happens for a reason, and that's what really pushed me towards the hip-hop scene. When I put out my first album [1990's Booming Words From Hell], I was 13. I made it in six hours. Boom, I'm outta there, and I've got an album. And we started selling those motherfuckers out of the trunk everywhere. We taught everybody in Detroit how to promote a record, market a record, and sell a record from scratch. Till this day, we're the only company who makes a profit outside of the ICPs, Kid Rocks, and Eminems, but once again, they're all conglomerates."

Smith is part owner of the independent record labels Gothom and Overcore, and that's apparently enough to make him a decent living. But you've got to figure that he earns only a fraction of what he would if he were to market his music on the level of Puff Daddy and Master P. Smith says that, with over 20 albums to his credit and well over 500,000 units sold, he's easily the biggest underground artist in America.

"I would say I'm the biggest underground artist ever in the history of rap music. Period," he boasts. "The biggest artist ever in the fucking history of fucking music. I got more records than fucking damn near the Beatles and Nirvana. It's just because we've been selling everything ourselves. Motown Records left Detroit [what seems like] 50 years ago. There's no outlets for anybody in music. We've got to walk over glass barefoot just to get something done, as opposed to the L.A. or New York scene. Those kids can just walk down the street to some bigass record company and try to get signed. But ain't none of that shit around here where I'm from. Just fancy cars and dope dealers."

The fact that Smith hasn't been signed to any of the high-profile rap labels -- Def Jam, Cash Money, Bad Boy, No Limit, or Priority -- is perplexing. After all, he's proven himself capable of commercial success, and his music, which draws as much from hard rock as hip-hop, has had an enormous influence on mainstream rap. Smith even plays in a rap metal band called NATAS that has much in common with Korn and Limp Bizkit.

"We've talked to labels, and it just depends on what they're talking about," explains Smith, who recently signed a distribution deal with TVT. "I'm not going to go from getting a whole pie to just getting a slice of pie with anybody. If they come, and they're talking the right shit, then maybe we can work something out. But up until this point, nobody has come with their shit together, properly, and addressed us on any situation. They're more or less scared of our shit."

So, until Smith finally signs on someone else's dotted line, he's just going to keep it real and in the streets, doing his thing. The idea right now is to expand his fan base, and to that extent, opening for the rap-metal novelty act Insane Clown Posse will undoubtedly introduce him to a new demographic. It's not the first time Smith has toured with ICP either. He joined Shaggy 2 Dope and Violent J last month toward the end of their wrestling tour, which included a stop at the Agora Theatre. It wasn't his normal gig and isn't the kind of thing he imagines himself doing again.

"I just went out there as Esham," he says, swearing he didn't wear tights. "I was like walking them down to the ring, like co-managing them, and before it was all over, I ended up getting in a six-man tag team with them because, you know, they have the belts and shit. They were Intercontinental Champions."

While Smith survived the obviously staged event without losing his integrity, he didn't escape without injury.

"Actually, two guys climbed onto the ropes and dropped some bigass elbows on me and shit," he says. "The shit hurt. After the tour, I walked up out of there with a sore neck and fucking sore back. I think my wrestling career is definitely over."