What a wonderful world this would be if rock stars had their own Olympics. 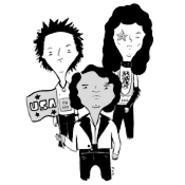 Kelley Seda
Greece is the word. And with the Summer Olympics hunkered down in Athens these days, it's the only word you hear. Nothing but Achilles this and Aristotle that as sportscasters make reference to Sophocles and kalamata olives during epic badminton battles between Laos and the Federated States of Micronesia.

Greece hasn't hosted an event this big since Yanni played the Acropolis. And it is big, beamed via satellite into our homes as one endless video montage of Hungarian heptathletes, Armenian archers, and Senegalese swimmers competing as Aerosmith's "Dream On" soars in the background.

But must music fans sit idly by as Marion Jones steals all the doping headlines from Courtney Love? Not if we can help it. We hereby institute the Rock Star Olympics, a competition in which Bela Karolyi shouts, "You can do it, Nada Surf!" and Nikki Sixx boinks stewardesses for the good of the team as the Olympic flame glows eternal from atop Michael Jackson's Jheri-Curled head.

Competition: Participants sit around a hookah, listening to Hendrix, and each one discourses on whether, if he were Luke Skywalker, he would still bed Princess Leia after discovering that she was his sister. The first three to jump up and make a Taco Bell run after 12 hours earn medals.

Prediction: Snoop tests negative for drugs and is banned from competing. Garfunkel starts strong, but is disqualified when he openly ponders what silence really sounds like. Marley is the front-runner, but fades to a bronze finish after the Wailers distract him with a game of soccer. The Red-Headed Stranger wins the gold when Dr. Funkenstein trips over Bootsy Collins's platform shoes at the finish line.

Competition: Style is more important than speed for these mack daddies as they strut down the track with a jewel-encrusted cane on one arm and a Hilton sister on the other.

Prediction: Aaron Carter might have bagged Lindsay Lohan and Hilary Duff at the same time if, in the first 10 meters, he hadn't also simultaneously ruptured a hamstring and discovered he had no rhythm. Big Boi veers off course after the shadow cast by André 3000 impedes his vision. When Ludacris moves, you move (just like that), but he still comes in a distant third as Superfly and Shaft share the gold -- and a busful of Catholic schoolgirls.

Competition: This relay event is scored on points compiled in categories that include hotel-trashing, whiskey-drinking, groupie-groping, paparazzi-punching, coke-snorting, and dead-hooker disposal.

Prediction: Kiss is an early leader until Gene Simmons goes down with a tongue cramp during the groupie competition. Bad Boy's medal hopes are dashed when the team is disqualified after P. Diddy pays his chauffeur $50,000 to trash the hotel room for him. The Go-Go's are on vacation until Belinda Carlisle collapses after drinking her weight -- 48 ounces -- in Jack Daniel's. Mötley Crüe surges to silver when Tommy Lee's mansnake snorts a line, punches a Star photographer, and videotapes Nikki Sixx doing the deed. But the Osmonds are the Little Mormons That Could, expending their pent-up purity in a feverish rage, highlighted by Donny and Marie's murderous, necrophiliac rampage in a Carson City brothel.

Competition: If you have basic cable, you've seen the seminal Ice-T movie Surviving the Game, in which people are hunted by sportsmen for fun. That's the general premise here.

Prediction: Marvin lulls opponents with sexual healing until his father takes him out in "self-defense." Clapton shot the sheriff, but he didn't have the cojones to off the deputy, and that hesitation will cost him. Suge Knight hires the same guys he allegedly used to kill Tupac and Biggie to win him the bronze. Hell hath no fury like Reba scorned, and when the lights go out in Georgia, little sister don't miss when she aims her gun. But that coldhearted sumbitch J.C. will shoot a man just to watch him die. Which means gold for the Man in Black.

Prediction: Duane Allman has the speed but lacks control and crashes when a ramblin' man strays into his path. Mick Jagger asks his Hell's Angels buddies for riding pointers, but they stab a member of the crowd instead. Jagger nonetheless takes an early lead, wiping out when his bottom lip gets caught in the spokes. Kraftwerk's Ralf Hütter has coldhearted German efficiency (and clearly enjoys wearing tiny Lycra shorts) but is blinded by the brilliance of his 1982 win in this event and manages only a bronze. Steppenwolf coasts to a silver, thanks to its chopper bicycle, custom-made by Captain America. Sheryl Crow wins the competition in dramatic fashion. She's a savvy rider -- she tells reporters afterward that "every day is a winding road" -- but she owes her gold less to technical skill than to the fact that she's been sown with Lance Armstrong's seeds of love.

Okay. Somebody can put out Michael's hair now.