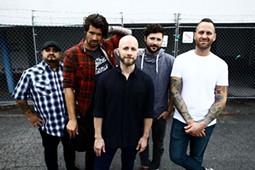 Ryan Russell
It’s appropriate the cover art for Tidal Wave, the latest album from the hard rock act Taking Back Sunday, features a photo of a child looking out at the ocean. The theme of water and its potentially destructive power emerges in several tunes on the album, including the title tack.

Singer Adam Lazzara’s wife took the photo when the family was on a vacation in Florida.

“She got this great shot of their son at the edge of the ocean,” explains guitarist John Nolan in a recent phone interview. “We liked the juxtaposition of it being this calm serene thing but then since the album is called Tidal Wave it gives you the feeling that something might go wrong in that scenario. The original one is more colorful and vibrant. We dulled it out and made it look like it was on an old weathered album cover.”

Nolan admits he’s not sure why “water” became such a dominant theme on the album.

“The imagery of the tidal wave is very powerful,” he says. “It makes you think of something that if you’re in that scenario, it’s huge and inescapable. I think there’s a lot of that feeling. Whenever there is a natural phenomena like that and you have to confront that, you’re usually up against that’s much, much bigger and inescapable than anything you can imagine. Some of the songs are about overcoming obstacles. That theme runs through more than a few of the songs on the record.”

Right from the opening tune, “Death Wolf,” the album suggests it will feature more guitar solos than past Taking Back Sunday albums. In the past, critics have pigeonholed the band, which formed in 1999 in Long Island, as emo or screamo. This album suggests a departure.

“There’s a lot of focus on guitar,” says Nolan. “Our records are usually guitar heavy. There’s a lot of thought into the sound we got from the guitars whether it was the amps or the different pedal combinations that we were trying out. We spent a lot of time on that. We got some sounds that haven’t been on a Taking Back Sunday album before. I was playing a lot of the lead stuff but my instinct is to lay back and do things that are simple and melodic and Adam is more into guitar solos and having it featured and doing something crazy and getting the tension. He was pushing that on me through the whole recording. I thought it was funny that the singer was pushing was for more guitar noodling. It ended up being more than I’ve ever done on a record as far as that kind of lead guitar work goes.”

With its call-and-response vocals, the title track sounds like it could be a song by the Clash.

“We were thinking directly Ramones and Clash and that ’70s punk rock,” says Nolan. “The original idea was on an acoustic guitar. I think I was playing it for the band and [drummer] Mark [O'Connell] heard it going there and wanted to do it. It’s the first time we’ve done something that directly in another vein with another band. It was exciting to make that choice. We wanted to do it and own it and just go for it.”

“You Can’t Look Back” has so much twang to it, a country band could remake it.

“I can see that, oddly enough,” says Nolan. “I don’t think anyone of us would be opposed to it. Adam would be excited. He has spent a good amount of time listening to country music but he would be the most excited of all of us.”

“So far, we’ve only played two live, ‘Tidal Wave’ and ‘Holy Water.’ On this tour in the fall, we’ll play as many of them as we can. We’ll get together pretty early to rehearse. It’s a whole other thing to play them live. We’re really excited. In the past, we haven’t highlighted as many of the new songs when we play live and we’ve been nervous about how they’ll come out. We have a confidence in this album and feel we can highlight it.”