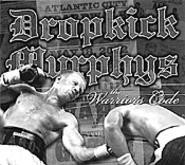 The Dropkick Murphys aren't exactly a band. With just one original member (bassist Ken Casey) and a cult that rivals Social Distortion's, the Boston group is an institution. In recent memory, the Murphys' original material has been spotty, their albums a mere formality to feed concerts that bring the brotherly vibe of a Southie barroom to sweaty mosh pits, where legions sing along to glorious blue-collar rockers. The new release, The Warrior's Code, is their most consistent studio album since their first.

The relentless disc is both more and less Celtic than its predecessors. Punk-rock guitar and Guinness-fueled choruses are still the center of every song, but now the band's bagpipes, tin whistles, and fiddles are delivered just as aggressively. Singing "toora loora la" louder and harder than Bing Crosby ever could have imagined, the Murphys cover the traditional "Captain Kelly's Kitchen," matching it with a version of Woody Guthrie's "I'm Shipping Up to Boston" and a half-dozen solid rally tunes. The album closes with "Tessie," a century-old baseball fight song that the group recorded as the anthem to the Red Sox's 2004 season, which ended with the city's first World Series victory in 86 years. And finally, the Murphys are writing like they're headed back to the playoffs.