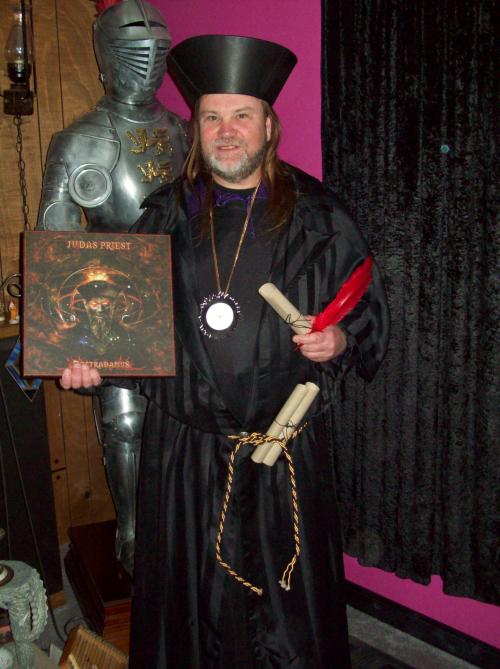 Monday, June 16, was just a normal day for most of us. For local metalhead Jim Bartek, it was an important anniversary: It marked a year since he first started listening every single day to Judas Priest’s nearly two-hour conceptual opus Nostradamus — centering on the 16th-century prophet whose writings have been fodder for conspiracy theories throughout the centuries.

Bartek says this wasn’t something he set out deliberately to do.

“I pre-ordered my copy and actually got it a day early,” he says. (It was released in the U.S. on June 17, 2008). “And I had listened to it four days earlier because it had been released on the Internet. I was just kind of listening to it on a daily basis, sometimes two times. I never really thought anything about it. But I happened to mention it to Bill, and he kind of went with it.”

“Bill” is Bill Peters — longtime host of WJCU 88.7 FM’s Friday evening Metal on Metal show — who knows a good angle when he sees one. After Bartek had extended his marathon to 100 days, Peters had him on the show, the first of several appearances which made Bartek something of a local celebrity. And it was Peters who spread the word to heavy-metal website Blabbermouth.net just prior to the one-year anniversary, garnering Bartek even more publicity.

“I’ve been getting all kinds of e-mails,” he says. “The other day, I woke up to call from WRIF in Detroit. They saw it on the site and left a message, Would I call and do an interview with them? So I called them back and did a little interview. I would never ever have expected anything like this from just listening to a record. It’s exciting, it’s overwhelming, it’s crazy. And believe it or not, I’m still loving that record.”

An unexpected bonus came from the publicity as well. A third-row ticket to Priest’s July 15 concert at Time Warner Cable Amphitheater arrived anonymously in the mail. Bartek, who’s been a Priest fan since 1978 and has seen the band about half a dozen times, can’t wait for the show, which will feature an “old-school” set of Judas Priest classics, including their 1980 album British Steel in its entirety. “The only thing that would make it more perfect is if I got to meet them,” he says.

Meanwhile, despite reaching the year mark, Bartek is continuing to listen to Nostradamus daily. “I was thinking I’d stop when I got to the 400 mark, but I can’t say it’s going to stop then either,” he says. “I can see it’s winding down. But I still enjoy listening to it.” —Anastasia Pantsios