Can Liz Phair reconcile her alt-rock past with her pop-rock present? 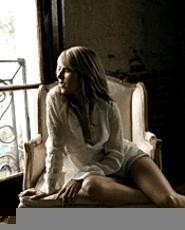 Liz Phair: "It'd be fraudulent for me to try to be indie. My life is not indie."
Boston is a classic-rock town, a place where the only stars play for the Red Sox, so it doesn't take a celebrity-spotter to notice Liz Phair gliding down Tremont Street, with her guitarist boyfriend, Dino Meneghin, on one arm and a dazzling gold purse on the other. On this drab avenue, she's a ray of Los Angeles sunshine.

Phair is in town to kick off a promo tour, and we meet at the bar of her posh boutique hotel for an interview. She's on the road in a stripped-down acoustic show that covers everything from her newest singles all the way back to Exile in Guyville, the 1993 alt-rock masterpiece that introduced her as a brash and cunning female rocker grinding the old macho canon under her shoe. But while Guyville made her famous, it also cast a shadow over the rest of her career. So we imagine that after the scathing critical backlash against her last full-length -- 2003's Liz Phair, an unabashed leap for the Top 40 -- Phair might be cagey or defensive, perhaps ready to settle some scores.

Instead, she sounds totally happy, even a little New Agey. She's excited about her career, her life on a major label, and her new album, Somebody's Miracle, which is even more polished and accessible than the last one.

Of course, hearing the songwriter aim for the Top 40 again will come as less of a shock, now that we've had two years to digest Liz Phair. That album's prefab pop won Phair scores of new listeners, but when her old fans heard it, some of them recoiled at the sight of their defiant alt-rock queen becoming everything they hated: a slick chart-bound pop star, working with the same songwriters and copping the same moves as Avril Lavigne.

For her part, Phair is still surprised that fans took her attempt to mainstream herself so hard. "I'm not one of those muso-heads," she says. "I didn't think that at this stage, I was still supposed to be making indie music -- which I just can't. It'd be fraudulent for me to try to be indie. My life is not indie. I think, this time, I tried really hard to be Liz Phairian, for the most part."

Fair enough. But, at this point in her career, what exactly does it mean to be "Liz Phairian"?

Sitting at the hotel bar and catching her first meal of the day, a light scallop salad, Phair is swift to correct the misconception that she deliberately signed to a major. She ended up there, she explains, following a series of acquisitions, in which Matador sold itself first to Atlantic, then to Capitol Records. So far, she's adapted well to recording for a larger audience. As she describes it, "I'm reaching out so much more, looking for a connection. Whereas before I was almost hell-bent on setting myself apart." Thanks to Phair's sunnier attitude, as well as to some top-shelf production (by John Alagia, producer for John Mayer, and John Shanks of Sheryl Crow and Chris Isaak), Somebody's Miracle has a mature folk-rock sound that goes down easier than the lo-fi productions of her Matador discs, and as a bonus for moms with kids in the minivan, this time there's no cussing.

Though the album sounds more like adult alternative than soul, Phair actually planned it as a response to Stevie Wonder's Songs in the Key of Life; she only backed off when she didn't have the time or material to do a 21-song double record. But Wonder still gave her a guiding principle: As on Key of Life, there are painful songs -- on "Table for One," she sings about her brother's alcoholism -- and other songs that are candy-coated, but still make room for frank, thoughtful lyrics.

The next night, at Boston's Paradise Rock Club, Phair and Meneghin make a brave stab at crossing the old stuff with the new, playing a barely rehearsed, intimate sit-down show, MTV Unplugged-style. Sure, the crowd was more excited when Phair dug out "Black Market White Baby Dealer" than when she debuted the new "Everything to Me." And setting aside the guitar to vamp her way through 2003's "Rock Me" drew far less drool than her cutesy, unerotic read of 1993's "Flower." On the other hand, compared to the bold choruses of "Polyester Bride" or "Extraordinary," the old favorites from Guyville actually sounded kinda small. We didn't want to hear Phair shoehorn her voice back into that low tomboy register, and the simple guitar parts of "Girls Girls Girls" and "Mesmerized" made the songs sound like brittle miniatures.

So where's the happy balance? The problem with hits like "Extraordinary" isn't that they're phony, but that they don't present us with anything that's unique to their performer. Similarly, on "Everything to Me," it's impressive to hear Phair's voice -- which used to change registers the way an old Chevy shifts gears -- tackle a lung-busting power ballad, but it's not Phair's power ballad. Anyone could sing it, and plenty of American Idol leftovers could do it better.

Perhaps Phair's blessing and curse is that she still wants to please both indie-rock fans -- who want her to stay the same -- and the new pop crowd. She wants to keep what she calls "the warty underbelly of yourself," that humanity that's in all of us and which came through so poignantly on those rough-sounding Guyville songs. But she also wants to be a star, the kind of celebrity who can project herself onto gigantic screens and Gap ads and huge, roaring crowds.

And that's what makes her so compelling, what may be the most "Liz Phairian" thing about her: that she's struggling so publicly to bridge that divide between the bedroom songwriter and the spectacular star, and that we can watch her succeed or fail almost song by song. If Sheryl Crow recorded Somebody's Miracle, which is not hard to imagine, it would be a blip on the radar. For Phair, it's another chapter in an ongoing struggle. It fascinates us, because the process is so transparent -- and because that ambition and that need to shine may be the most human things about her.