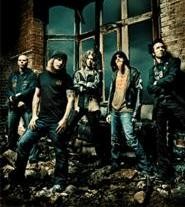 Stone Sour features Slipknot's Corey Taylor (second from left) and Jim Root (middle).
Call the Family Values Tour a nü-metal showcase if you must -- we'd certainly understand. But remember: When Korn, Slipknot, and the Deftones spawned the genre, "nü metal" wasn't a punch line. It has since become the most critically maligned movement since hair metal, though its dreadlocked, drop-tuned giants are proving they have twice the staying power of their poodleheaded predecessors.

In the wake of recent No. 1 albums by second-wave acts Staind and Disturbed, some of the genre's founding fathers have returned to reclaim their crowns, mounting a big-rock roadshow that's one of the summer's hottest tickets.

Korn, the Deftones, and Stone Sour (which features members of Slipknot) are headlining the fourth Family Values Tour, with support acts representing fashion rock, guard-your-grill hardcore, and big-name radio rock. Hell, this year, there's even a girl onstage. So the pundits who pronounced the movement dead when Limp Bizkit stopped selling now must admit that the music is still evolving. A little. It's no longer synonymous with "rap rock," at least.

"I'm thrilled to death that rap is working its way out of metal," says Stone Sour guitarist Jim Root, by phone from a photo shoot at San Antonio's Verizon Wireless Amphitheater. "And I'm thrilled that guitar players are learning their fretboard and using it well. I really couldn't tell you what Stone Sour is. We write what we write. I've heard us called -- get this -- the new grunge wave, straight-up hard rock, and alternative. That whole labeling thing is silly."

Root made his name as masked man No. 4 of Slipknot, the one true metal band of the nü age. When you have eight bandmates and just three albums, you have to hustle a little for your money and art. Root says that no matter how technically demanding Slipknot's deadly metal is, the band's extreme nature denies its members recognition as musicians. Stone Sour's new second LP, Come What(ever) May, lets Root and Slipknot frontman Corey Taylor drop their guard and turn in some ballads -- 2002's "Bother" helped send the Spider-Man soundtrack platinum -- in addition to Slipknot-caliber shotgun blasts.

"This album is a step in the right direction as far as the songwriting goes," says Root. "You can be the best guitar player in the world, but the real test is whether you can write a song."

When you're in Korn, however, the money from seven platinum albums gets split five ways -- or rather four, since guitarist Brian "Head" Welch traded downtuning and masturbation for Jesus -- so your legacy is secure, and your bills are paid. Last year, the Grammy-winning group signed a reported $25 million deal with EMI/Virgin Records and Live Nation, agreeing to split revenues from merchandise, publishing, and touring -- call it raging with the machine. The band also made a bold decision to record the new See You on the Other Side with hitmakers the Matrix (Hilary Duff, Avril Lavigne). Both gambles paid off. Other Side debuted at No. 3 on the Billboard chart and has sold nearly two million copies. This tour, Korn's headlining set will include an acoustic version of "Hollow Life."

The fourth Family Values trek since 1998, this year is a cross between Lollapalooza and Ozzfest, with a side stage and extra attractions, including a paintball competition. Unlike previous editions, the 2006 lineup is skimpy on rap, techno, and backward ballcaps. But overall it's the most diverse yet.

With members from Orange County and St. Louis, Bullets & Octane play trashy glam rawk, wearing black jeans, T-shirts, and eyeliner. Boston breakdown badass Bury Your Dead is the heaviest band on the bill. If you don't want to catch a spin-kick in the pit, this hardcore set is a good time to get some water. Knoxville's 10 Years play the kind of post-Staind radio rock that can double as a slow-dance number at proms -- even if you don't know the band, you've probably been tired of its power ballad "Wasteland" since June.

Japan's Dir en Grey looks like a delicate take on Marilyn Manson, and its music recalls romantic-rock import HIM, with infectious grooves and random outbursts of demonic vocals. In the absence of Evanescence, Texas' female-fronted Flyleaf has done well: With nursery-rhyme hooks, songs like "I'm So Sick" sound like Kittie covering Korn. Cult favorites since 1989, Northern California's avant-hard rockers the Deftones helped reintroduce the notion of heavy during the alternative '90s, and the group teamed with legendary producer Bob Ezrin (Pink Floyd, Jane's Addiction) for its upcoming fifth album, Saturday Night Wrist.

Even during the band's many doldrums, Blue never questioned whether he'd make it to the main stage. Born into the business, he's the son of Cher and Gregg Allman. After stewing for a decade, he thinks the delays might ultimately work in his band's favor.

"The thing that's good about that is, in that time, the Killers came out, and Interpol came out," says Blue, in a deeper version of his dad's gravelly voice. "I think the culture has caught up to where we've been for a long time now."

A guitar prodigy, Blue has written music and lyrics that have made Deadsy popular with fellow musicians. Korn is the band's biggest booster: When the group extricated itself from a deal with Sire, Korn signed them to its Elementree label. But the children of Korn weren't always so generous when the two bands hit the road together. Blue says that the Family Values crowds are far more open-minded this year than they were during the 2001 tour, and -- aside from a fatal sucker punch in Atlanta -- aren't "straight meathead." He adds that no matter what you've read, neither are the bands.

"The Deftones are a deep, complex band," says Blue. "Stone Sour -- the whole band are shredding musicians. Korn are like the Led Zeppelin [of the movement]. These bands stood the test of time. This is all real-deal motherfuckers out here."