It's finally dawned on record companies that they're screwed. But is it too late? 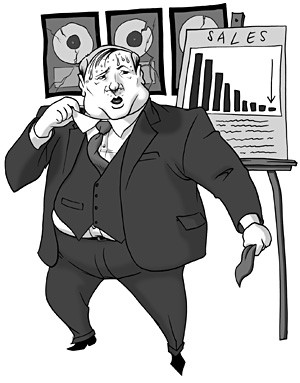 It's always darkest before the dawn. Or so the music industry has been reassuring itself lately. You really can't blame record companies for that whiff of optimism: Over the past few years, they've been bleeding like a hemophiliac with a razor fetish.

The numbers are indeed grim. SoundScan figures for the first part of 2007 reveal a 20 percent dip in CD sales and a 9 percent fall in total music sales, including digital downloads. This follows a 6 percent drop in 2006 and a 22 percent plummet since the halcyon days of 1999.

And it's not happening just in the U.S. Germany's record sales are half of what they were in 2000, as file-sharing and a mass epidemic of burned and counterfeit CDs funnels across Europe. Once 2007's total tally shakes loose, it's expected that music sales across the globe will fall 11 percent from the previous year's figure.

Major labels (which are responsible for 70 percent of the market) are hurting the most. Over the past couple of decades, they've relied on a handful of multiplatinum albums that pretty much picked up the slack of underperforming artists, wallet-busting contracts, and other industry-crippling bad moves.

Record companies, which once wielded Zeus-like power, have become increasingly ineffectual in today's changing environment. The internet has been one of the great levelers, neutralizing major labels' onetime advantages in distribution, promotion, retail, and radio. The labels' big bucks — traditionally poured into advertising, videos, and other things that let folks know there's a record out — just don't buy what they used to.

"Everybody feels the pain," says Rich Egan, owner of independent label Vagrant. "What the indies have over the majors is that we can't and don't spend stupid money. If you keep your costs relatively in check, this is still a fairly healthy business model."

The thinking goes: If record companies want to hang onto their most profitable artists, they need to keep them happy. Deals recently signed by Korn and Madonna give the labels a cut of concert, T-shirt, endorsement, and all other ancillary income, just like what an agent collects. In exchange, artists get a bigger check on the front end (in Madonna's case, a rumored $120 million over the next 10 years). But if they want other musicians to sign similar deals, the majors will have to erase a long history of self-interest and exploitation.

Yet can labels function as agents rather than employers? Are they even capable of delivering what they promise? They've proven reasonably competent at creating stars, but there's a lot more to the business these days than merely selling music.

"The labels aren't staffed with people who know about touring, merchandise, or publishing," says Egan, who used to manage bands. "Just because you fly on planes a lot doesn't mean you know how to fly them."

Gerd Leonhard and Dave Kusek, authors of The Future of Music, suggest a "utility model": Labels will strike deals with internet providers to recover money that's lost to file-sharing, by implementing a user surcharge — sorta like the one affixed to blank-tape and recording-equipment sales.

Leonhard also proposes licensing music to huge social networks like MySpace. "What they really have to sell is access to the music and to the artist, to the brand, and to the experience that goes with the music," he says. "Companies like Sony got into music because the profits were obscene right after CDs. Now, if you want to sell CDs, you have to be a lot smarter, because you can't control the system. There are so many people involved now. It's no longer about just music."

More private equity deals could also surface in the wake of thinner profit margins and an increasingly turbulent environment. Entertainment is a volatile business that rewards risk-taking. In essence, private investors (like Terra Firma, which recently took over EMI) are better equipped to ride out industry turmoil during the recovery process.

"It's not enough [for a public company] to just make money — you have to keep making more money," says Leonhard. "A lot of media businesses are not suited to that, because they could be having a huge profit one quarter and none the next."

Major labels have already seen what happens when they just sit back and do nothing. But Beggars Banquet CEO Lesley Bleakley also cautions against overreacting. "If you don't do what you're good at, you dilute everything," he says. "It's going to take some very aggressive CEOs and some unpopular CEOs to actually change things."

While the internet poses a real threat to the record industry, music itself remains a vital business: Concert revenues have soared from $1.7 to $3.1 billion over the past seven years. The labels may be shedding ground faster than the Arctic shelf, but if they can rethink their current working model, there's still plenty of new territory that's worth exploring.