The Arcade Fire is unaccustomed to praise, but that feeling won't last long. 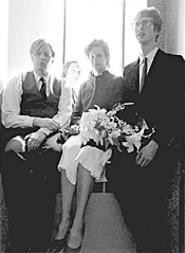 Arcade Fire: A finger on the pulse of geeky guys everywhere.
A week and a half after the Arcade Fire's triumphant appearance at New York's CMJ Music Marathon -- a four-day stint that included packed shows, a flattering profile in The New York Times, and reported major-label interest -- the band's Win Butler and Régine Chassagne are way the hell up in Bar Harbor, Maine, hiding out at Butler's parents' house, far from the glare of the indie-rock spotlight.

"We're just hanging out, working on some new songs, and making a video," Butler says on the phone one evening, gently deflecting the idea that they need the getaway. "I mean, there's so few people who know about our music, in the grand scheme of things. It isn't like I'm walking down the street here and people are asking me about my dream life or something. It's really pretty small-time."

He's right, of course; the fevered postings of a devoted group of bloggers and even the imprimatur of The Times' Arts & Leisure section do not necessarily a household name make. Still, the Arcade Fire is shaping up as one of the year's buzz-worthy properties.

"We've never really put out a record before, so we've never done interviews and that kind of thing too much," Butler says over a wave of excited shouting in the background. "So it takes some getting used to. But I don't think that too often we'll be in the situation where we have to be as busy as we were that four days in New York. It was pretty insane." He considers for a second. "Touring's a lot more calm."

If Butler and his bandmates haven't yet set the streets of Maine atwitter, it isn't because they don't deserve to. Funeral, the Montreal-based quintet's debut, is an accomplished piece of feverish psych-pop beauty, a sort of midpoint between the precious retro stylings of the largely defunct Elephant 6 crew and Modest Mouse's cracked hillbilly art-punk. Butler, the lead singer, writes about the everyday emotional vertigo endemic to brainy guys his age, but renders it in shabby, magic-realist language that's reflected in the group's energetic sound, which somehow manages the trick of sounding like it's in the midst of a never-ending crescendo, even when it's quiet. Like More Adventurous, the recent album by L.A. guitar-popsters Rilo Kiley, it's indie rock for people fed up with the premium most indie rockers put on sounding disengaged and disinterested.

"Um, thank you," Butler mutters disinterestedly when we tell him that. "I've always related to music that is trying to express something very real and tangible, but not necessarily in a straightforward way. A lot of my favorite Bob Dylan lyrics are maybe talking about an emotion or talking about something you can identify, but not in just a literal, one-plus-one-is-two kind of way."

Part of getting that sound on tape, Butler says, involved their recording process, which had them balancing time spent in "a studio a couple blocks from our house," laying down bass and drums and guitar parts, with working at home to flesh out the album's complicated arrangements, which include strings and accordion and the sort of auxiliary percussion in which seven-piece bands often find themselves indulging.

"There's a bunch of stuff, for the way we work, where we're better off working at home," he explains. "We weren't going out to make the lushest-sounding record you've ever heard; we were trying to capture the way the band sounds. Like, the strings we recorded around one microphone in the living room. I think you ought to be able to have time to work at home, when you're not thinking about being on the clock or anything. No matter if you have a bunch of money to spend on a record or not, it's still stressful, thinking about paying by the hour. There's no way of getting around it."

Butler says the name the Arcade Fire has been kicking around for years, applied variously to a handful of musical concerns, but he adds that the current band got its start when he met Chassagne (who is now his wife) in Montreal, during a "rock band" phase. Chassagne, who sings and plays drums, piano, and many other things, "was playing medieval music and studying jazz, and had a background in electro-acoustics," according to Butler. "She'd never played in a rock band. So I think for both of us, the nature of what we were doing changed a lot." Eventually, and with the slow interpolation of several other players -- including Butler's younger brother Will, who left college in Chicago to join in on bass -- the band settled into the sound captured on Funeral.

"It's kind of a complicated thing," Butler says of his and Chassagne's collaborative style; the couple does the bulk of the band's songwriting, while the other members pitch in on arrangements. "We're just always around each other, so whenever someone's coming up with something, the other one's like hanging over the other one's shoulder, saying, 'No, don't do that.' Or like one of us will come up with a verse, and then the other person will come up with a vocal melody for the chorus and then a lyric for the other part. It totally depends; it just kind of comes out of living together and playing music all the time. It gets so complicated that you can't even tell who came up with what at a certain point."

Butler admits to liking a certain amount of that confusion. "The band just totally disintegrated when my brother came up from Chicago. We didn't have a drummer, we didn't know what we were gonna do, and yet we had this really strong desire to make a record and finish it off. And I think out of the chaos of that period, the spark of what we're doing now happened. I think what we're doing is gonna always change in that way."