With Sammy Hagar back onstage, Van Halen trudges on. 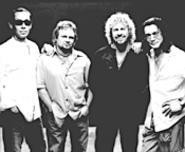 On its latest tour, Van Halen romances the past as much as it does the ladies.
Michael Anthony used to drink Jack Daniel's straight from the bottle. The fleshy Van Halen bassist, whose body once looked as if it were held together by Bisquick and bourbon, would gulp the stuff down right onstage, draining liter bottles of Tennessee's finest, to no end but his own. The guy was the life of the party and the death of short-term memory.

Anthony still sweats whiskey these days, still flashes a 100-proof smile capable of reducing Breathalyzers to ash. But now he drinks a little slower, walks a little faster. His arms, perpetually jutting out of a sleeveless something or other, are more defined; his liver no longer requires its own zip code.

During a recent Van Halen gig at Buffalo's HSBC Arena, Anthony ran circles around the stage and pounded his bass with his fists like it owed him money. Four songs into the band's two-hour set, he let loose with a rumbling solo that sounded something like heavy-metal whale calls. He finished by ramming his head into his amp.

And then, for the capper, he pulled out the Jack Daniel's to loud approval. It was the moment of revelry and release everyone had been waiting for. But instead of the economy-sized bottle of Jack that Anthony used to chug, he downed one of those little sissy, single-shot jobs -- the kind they charge five bucks for on airplanes, the ones Grandma sneaks into the bingo hall.

"Ya better call up a doctor, feelin' high," Anthony sang as VH launched into "Somebody Get Me a Doctor." "I'm overloaded baby, I say, 'Bye-bye!'"

Apparently, Anthony has bid adieu to the shitfaced shenanigans that once defined his band. Van Halen still parties, but now it does so more responsibly, like parents who only get loaded when their kids are away at camp. In its prime, Van Halen was as sticky, sweaty, and accident-prone as the best keggers. Now they're hard-rock parental units approaching their fifties, and so are many of their fans.

In Buffalo, twentysomethings were a rarity, though the crowd is still more Budweiser than BenGay. "Let's pee in the sink!" a dude bellowed in the bathroom when confronted with long lines at the urinal. He was standing by a guy who had fashioned a cowboy hat out of a Labatt Blue box.

This is hard rock's first generation all grown up, and it feels a little weird for anyone under 30, like when you first start seeing your parents in yourself. Van Halen has done its best to mature right along with its fans. The three original members -- Anthony and brothers Alex and Eddie Van Halen -- have buried old grievances and reunited with blond belter Sammy Hagar for the first time in nine years.

"I made the call to Al, but it was not in any business sense. It wasn't like, 'Hey, let's get back together,'" Hagar said in a recent conference call, recalling the process by which he made amends. "I happened to be in Southern California with my family, vacationing at a resort at the beach, and I was talking to somebody else, and they said, 'Hey, you ever talk to those guys?' and this and that, and I'm going, 'You know, no. I'm going to give Alex a call one of these days.'

"And then I finally did. I just called up Michael Anthony, who I had been in connection with a lot, and said, 'Hey, get me Alex's phone number. I think I'm going to call him,' and when I did, we talked for so long. It was just, wow; I really miss this friendship. And then, of course, once you start playing music, it was all over."

Van Halen's attempt to start anew was evident in Buffalo. The band began the set with "Jump," something of a surprise, considering Hagar's past reluctance to play many David Lee Roth-era tunes.

"I used to be a little sensitive to the old material -- everyone knows that -- and you know, we only did two or three [songs]. I'm not now. It's like we have a whole different outlook on everything."

In a way, yes, and in a way, no. During the '80s hit "Panama," Hagar refused to sing all Roth's lyrics. "Not me," he mouthed, denying responsibility for authorship of the song, as he let the audience supply the vocals. And though the band played more Roth material than it had in the past (5 out of 20 numbers), it still seemed lacking, given how much more popular the pre-Hagar material is on classic rock radio.

But, as in Diamond Dave's days, Van Halen is still never short on showmanship. On the current tour, they bound about a circular silver stage, which opens into two pits where around 100 fans high-five and toast the band throughout the show. At the back of the stage, a towering video screen is embedded in a large, rust-colored metal sphere that looks like a giant depth charge.

In Buffalo, the band was constantly in motion, with Hagar jogging in place, doing the limbo, and pouring Corona down Anthony's throat. Alex Van Halen's drumming was so manic, it sounded as if he were banging away at four kits simultaneously. Eddie Van Halen, who didn't drink with the rest of the band, played with a cigarette dangling from his mouth, his long black locks pulled into a knot atop his head. "That hairdo makes him look like Zippy the Pinhead," the lady next to us observed.

Four songs into the set, lighters were in the air. Husbands and wives kissed passionately during Hagar's acoustic rendition of "When Eagles Fly." Later, a guy proposed to his gal at the side of the stage by holding up a large banner that read "Hey beautiful, will you marry me?" This happened right before the band tore into "Ain't Talkin' 'Bout Love."