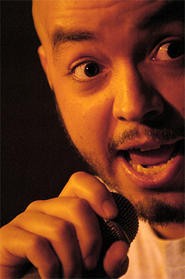 Walter Novak
Ghetto Wisdom, at the Beachland February 1.
After two years of deep-fried fun, the aptly named Town Fryer (3859 Superior Avenue) will close on Wednesday, February 21, following a Fat Tuesday party. Specializing in roots music and comfort food, the cozy watering hole was a unique island of southern hospitality on the edge of downtown Cleveland.

"It's bittersweet," says owner Susie Porter with a friendly twang. "I've got a great new life happening in California. I'm going to be with my love. Men make women do crazy stuff."

Porter came to Cleveland from North Carolina to take care of her ailing father. When she couldn't find the kind of down-home nightspot she was used to, she spent over a year renovating the old Chung Wah restaurant. Balancing retro and kitsch, she created a homey atmosphere where lawyers rubbed elbows with roller-derby queens.

The venue did a brisk trade in the kind of food and music that traditionally hasn't been a big draw in Cleveland. After years of struggling to find a venue to play, rootsy local songwriters like G.S. Harper found a niche there. Day and night, the Fryer served gumbo, red beans and rice, and just about anything that would fit in a fryer: chicken, catfish, macaroni and cheese, Twinkies, and Oreos.

The Fryer will close after a Fat Tuesday blowout on February 20. The last bash will feature live music and fresh crawdads from Louisiana. After a final-weekend parade of bands, Porter will have a memorabilia auction Monday, February 19. She'll sell fixtures from the club's rustic signs to the Elvis beads hanging in its doorway. Until then, the Fryer will welcome musicians on the weekend and serve a limited menu after 4 p.m. The building is for sale.

"It's been fun," wrote Harper in a eulogy for the club. "I have become close to a lot of really, really weird, wacky, and absolutely wonderful people. We all became a highly dysfunctional but really amazing family."

· Cleveland's Heads Up Records will release the final album from internationally renowned tenor saxophonist Michael Brecker, winner of 11 Grammy Awards, who died of leukemia January 13. Slated for spring release, the as-yet-untitled disc will feature Herbie Hancock, Pat Metheny, and others.

· Smog Veil Records is compiling a career retrospective of Peter Laughner, the late guitarist best known for Pere Ubu and Rocket From the Tombs. Slated for November release, the multi-disc comp will feature material from most of his bands. "This was the guy who really was one of the first catalysts in Cleveland's underground scene," says label owner Frank Mauceri. "Not just in what became the Cleveland punk legacy, but in a larger rock and roll context that he needs to be remembered for."