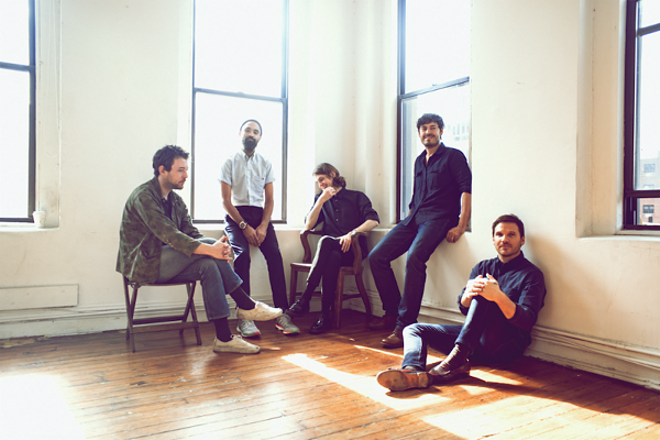 Photo by Shawn Brackbill
Fleet Foxes frontman Robin Pecknold has the voice of an angel. It's a voice that could easily be confined to a solo singer-songwriter gig, something he's experimented with in year's past. But Pecknold is made all the better with a band. And at last night's packed-in Agora show, the six-piece (on the road) act, finally back in tour mode after years of unknowns, showed how it's only stronger together in its return.

Armed with a new record, last year's Crack-Up, the band kept last night's audience with it through the familiar and the more experimental. There were moments of sing-along grandeur ("Fool's Errand," "White Winter Hymnal") and also full-on "we're just trying to understand what we're hearing" like with "Mearcstapa."

The band, known for its beautiful, often hymn-like songs, still brought the melancholic lyrics and lush, golden harmonies to the table but was far less afraid to make sounds that didn't completely sit comfortably. Keys and time signatures changed easily through songs like "Third of May/Ōdaigahara." And often, the instrumentation called for flute and tuba, not ironically. Outside, a storm loudly brewed, but inside, songs played with light and dark, summer and winter (especially "The Shrine/An Argument," which offered a bright yellow effect on the screen behind).

Strangely, some in the back of the downstairs stunningly re-done space, chose to talk loudly through much of the set. At one point when Pecknold had the stage to himself and played some of the oldies like "Tiger Mountain Peasant Song" and the new "If You Need To, Keep Time on Me," listeners actually shushed the talkers in the back. And as tickets were upwards of $50, that was understandable.

If you're not trying to be here, please leave.

On stage, Pecknold had few words to say other than "thank you," but he did mention the band had some family in the audience and was glad to be back in Cleveland for one of its first shows here in nearly a decade. And he seemed to mean it.

After percusionist Father John Misty (Josh Tillman) left the band back in 2013 following a long tour with the band's second record Helplessness Blues, things quickly fell apart. Pecknold, the sole songwriter for the group at the time, took years to find himself. The rest of the group thought it was all over.

Now back in the swing of things with a record that is more of a team effort, they're proving there's still something here that deserves continued exploration. Sure, the folk music inspiration is still involved as are all the annoying "oohs" and "ahhs," and maybe people have moved on from that thing that made indie darlings Mumford and Sons and Bon Iver so hot, but at last night's show, the Seattle-based group proved it's made it through the wilderness. The concert felt a whole lot like a beginning, like there's so much more to come. Hopefully, that's true.

The loudest applause of the night which drowned out even the talkers in the back came when the crew returned to play the song we were all waiting for, "Helplessness Blues." It was every bit as sensational (and more grown up) as expected, like letting in the sunshine.