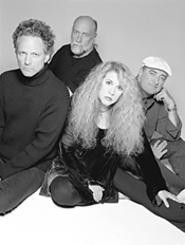 Fleetwood Mac
When British blues guitarist Peter Green left John Mayall in 1967 to form his own band, he reputedly named the group after his drummer (Mick Fleetwood) and bass player (John McVie) as a joke. But no one was laughing three years later, when Green's deteriorating mental condition led him away from Fleetwood Mac, touching off a series of changes in both personnel and musical direction for the band. Fleetwood and McVie then backed Brit keyboardist Christine Perfect and California rock guitarist Bob Welch, and the band morphed from blues to pop. Perfect and McVie would marry, and Welch would leave after making five albums.

In 1974, the band's second romantically involved duo signed on -- guitarist Lindsey Buckingham and vocalist Stevie Nicks. In addition to its celebrated personal turmoil, this lineup generated the lion's share of the nearly 75 million Fleetwood Mac albums sold to date. Rumours, released in 1977, accounts for one-third of those sales alone and introduced such classics as Buckingham's "Go Your Own Way," Nicks's "Dreams," and Christine McVie's "Don't Stop." In the years that followed, Fleetwood Mac's self-titled 1975 release, '82's Mirage, and '97's The Dance all topped U.S. album charts; the band's new album, Say You Will, was made without Christine McVie and has been praised primarily for Buckingham's production. Time will tell whether any classics reside there, though the band's live show will certainly contain plenty.