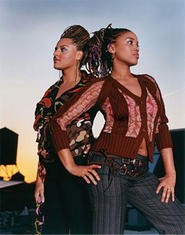 Urban music doesn't get much hotter or cooler than London's Floetry, a girl group that spits a smooth combination of hip-hop, song, and smooth neo-soul. The don't rock the mic -- they own it. If you didn't see sultry singer Emily King wow crowds on the John Legend tour, now's your chance to make good. And mixmaster Mick Boogie will get the party started. Scene's sonic technicians have determined that his remix of the Shop Boyz' "Party Like a Rock Star" is no less than 17 times funkier than the version you hear on every other radio station twice an hour.