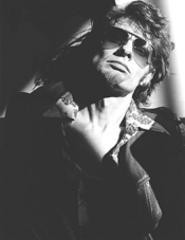 Jim Thirlwell, shown here after he chose life.
Jim Thirlwell, the man behind Foetus, Steroid Maximus, Wiseblood, and other post-punk industrial projects that helped shape the genre over the past decade, recently returned from a self-imposed six-year hiatus. After the release of Gash in 1995, Thirlwell stopped performing and recording to deal with some personal issues. He's purposefully vague about the details of what was likely a nervous breakdown. But to regain peace of mind, he had to distance himself from his music, which consists of extreme noise constructed with tape loops and sequencers.

"I had been living my life pretty out of control and started to pay the consequences," Thirlwell says. "Anyone who had seen my live show around that time can attest to that fact. I basically got into a life-and-death situation and had to stop my life and turn it around and work out a way to live . . . and decide whether I did want to live or not. I had no other choice."

Once he decided that living wasn't so bad, he realized he didn't need artificial substances to enhance his experiences.

"I have moments of euphoria when I'm walking down the street and I go, 'Jesus Christ, this is what I was spending so long concocting intricate balances of chemicals to achieve?' And that feels good, dealing with feelings screaming up in your face."

Born in Australia, Thirlwell moved to London in 1978 and started recording there. Three years later, he released his first single, "OKFM," on his own Self Immolation imprint and issued several solo albums before teaming up with members of industrial-minded acts the Swans, Hugo Largo, and Unsane to form the side projects Foetus Corruptus and then Steroid Maximus. He moved to New York in 1984 and eventually signed with Sony in 1995, just as disciple Trent Reznor was burrowing his Nine Inch Nails into mainstream consciousness. And then things promptly fell apart.

"There was a finality to the albums I had been making," he says. "I think I really nailed the pre-apocalypse, desperate, this-is-it-baby, this-is-the-last-one-before-they-drop-the-big-one statement on Gash. And that's what I had been building up to slowly. But you can't really keep hammering that point home forever, because how can you keep making final statements? It gets redundant, so you tend to step sideways."

On Flow and Man-orexia's Volvox Turbo (two of the albums he's released this year), Thirlwell ruminates on the horde of emotions that have accompanied his newfound peace of mind.

"Flow connotes a continuum instead of this finality, this death-wish thing," he continues. "That's not to say that I think it's particularly mellow, but there's definitely different energy on different tracks. I'm trying to achieve spatial quality in production, and I think the timbres are really different. And there is sophistication in the arrangements, programming, and instrumentation. And Flow is 'wolf' spelled backwards, and I kinda like that."

Compared to the rest of the Foetus oeuvre, Flow is an ambitious and relatively tuneful reflection of Thirlwell's past work. It even comes off as domesticated by comparison. But Thirlwell says it's just a sign of how things have changed for him.

"I think this totally fits in, just as any of my work fits in," he explains. "Given that the Foetus albums are a diary of where I'm at, Flow is definitely the next installment."

Keeping up with Thirlwell's various aliases, however, can be challenging. He has also released recordings as Clint Ruin, DJ Otefsu, and many variations on the Foetus foundation -- Scraping Foetus off the Wheel, Foetus Under Glass, Foetus Über Frisco, Foetus All Nude Review, and Foetus Corruptus. Keeping all these side projects straight can be a dizzying task, but Thirlwell has "simple criteria." Manorexia and Steroid Maximus are both predominantly instrumental, and anything Foetus-related has occasional vocals.

He says he plans to take Manorexia to Los Angeles next summer, with a string section and live percussion, for a series of performances. While it sounds like a radical departure for Thirlwell, he maintains it's not so off-kilter.

"I used to have this purist ideology," he says. "But that doesn't exist anymore. Really, there is no such thing as selling out. It's unfashionable not to anymore. You run off of a different energy after a while. I wouldn't have reached the same conclusions I have without going through the things I did, musically, physically, emotionally, spiritually."

Thirlwell believes the Foetus name is good for at least another three albums, and he envisions the next one will be yet another overhaul.

"I do see a grand scheme of the work I want to leave and accomplish," he explains. "There is a grand plan that will make itself clear to myself and my adoring public as time goes by. If you look at the Foetus albums, there are certain threads through them: four-letter, one-syllable album titles. They are a document of my life. Beyond that, it's wide open."