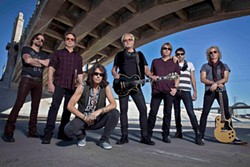 Foreigneronline.com
Singer Kelly Hansen wasn’t always the singer in Foreigner, the classic rock act with roots that go back to the '70s. He joined in 2004, shortly after the departure of singer Lou Gramm, the guy you hear on all the band's biggest hits.

The way he explains it, he just happened to be in the right spot at the right time. Hansen, who sang in hard rock bands and did studio sessions with rock acts throughout the '80s, had drifted into the world of artist development and production when he heard that Foreigner founder Mick Jones was looking for a singer. He contacted him, and Jones sent him a tape with the instrumentals from five Foreigner tracks on it.

“I had gotten away from what I did best, which was singing,” says Hansen in a recent phone interview from an Austin tour stop. “I was determined to try to change that and I wanted to be more proactive. I had heard about a couple of gigs where I wasn’t even called. I figured I needed to change my approach.”

He read about this show that Jones was doing — he says it was unclear if it was a Foreigner show or a solo project.

“Unbeknownst to me, he was thinking of starting up Foreigner, which had been in suspended animation after Lou [Gramm] left in 2002,” he says. “There was some back and forth, and it took a lot to get that machine started again. They sent me a CD of five of the big hits.”

Jone and Co. liked what they heard and invited him to rehearsals. He agreed, asking to be the first guy to audition.

“We jammed for an hour and an half,” he says. “I was very serious and taking it very seriously. I got home at 6 p.m. and they called at 7 and wanted me to get ready for gigs for they had lined up in the next five days. It’s been going ever since.”

At a time when few rock bands can fill arenas and outdoor sheds, Foreigner continues to play to some of the biggest crowds of its career. The band’s 2011 tour with Journey broke records in several major markets.

“We really enjoy the summer shed kind of vibe,” says Hansen. “Sometimes, it can be super hot, but that’s all part of that summer experience in the U.S. It’s always fun to go out with bands that we’ve known for a long time.”

A select run of winter and spring 2012 dates ended on April 14 with a headline appearance before a crowd of 140,000 at the NASCAR Samsung 500 at the Texas Motor Speedway. According to press materials, “No other heritage band makes more NASCAR appearances than Foreigner.”

“The NASCAR crowd really is a Foreigner crowd,” says Hansen. “That’s been a great relationship for us. I got to go around the track. One time I was at Atlantis Speedway, and we were doing a photo session. There were no emergency vehicles, and we were using pace cars in the photo shoot. They asked us to take the cars around for a couple of laps. No helmet. No anything. I remember going down the straightaway in a Camaro SS at 130 miles per hour behind Mick. I was thinking, ‘Should I pass him or should I not.’ I decided it was better not to.”

Last summer, the band hit the road with rap-rocker Kid Rock for his Cheap Date concerts, which drew record crowds in many cities, including Rock's hometown of Detroit.

“I think it was a great combo,” says Hansen when asked about the tour. “Kid Rock was great about giving us full use of everything. He’s a super gracious host. We worked really well together and were part of that record for sold out shows in Detroit. It was very cool. It’s a large number of people on the road together, probably over 100. Every night, it’s just cranking out lots of great tunes. It was really fun.”

In 2011, the band released its latest album, Feels Like the First Time, a three-disc set that includes new digital studio recordings of the band’s greatest hits, a DVD of a nationally broadcast PBS TV special, and “Acoustique,” a CD of unplugged renditions of songs from the back catalogue.

"These acoustic versions of the songs started out as rearrangement of ‘Say You Will’ just to do it acoustically live,” says Hansen. “When we were promoting Can’t Slow Down, we did some live simulcast in Germany as an acoustic act and got such a great response. It was quite a shock. That evolved into our need to record them. People like to hear the songs in a skeletal way. It really shows the quality of the writing and the arrangements. It’s a real challenge to do it this way.”

The numbers are impressive. Foreigner has 9 Top 10 hits (that’s just one less than the Eagles and as many as Fleetwood Mac). YouTube views of Foreigner’s hits have passed the 250 million mark. And when the comedy-drama Orange is the New Black used "I Want To Know What Love Is" as the end title of the June 2015 season finale, Spotify streams increased by over 400 percent  as a result.

Foreigner has something special planned for its appearance at Hard Rock Live. Solon’s Note-Oriety Show Choir will perform with the band on the classic hit “I Want To Know What Love Is.” Also, Foreigner will donate $500 to the choir for appearing with the band, and the choir will sell Foreigner CDs at the concert to raise money for Foreigner’s charity partner, the Grammy Foundation, which aims to cultivate "an understanding, appreciation and advancement of the contribution of recorded music to American culture." Both Foreigner and the Grammy Foundation are intent upon helping to keep music education available to students as part of the core curriculum in high schools throughout North America. The entire proceeds of the choir’s CD sales from this show will be donated.

“We often either hold a contest or send out an invite to have a high school choir come and sing with us,” says Hansen, a proud product of the L.A. public school system. “It’s really to raise awareness about the lack of funding for school music programs. Whenever budget cuts are discussed, the first thing they go to is music and the arts. That’s a shame. It’s important to be exposed to things that come from other cultures around the world. It’s important to be able to use your voice in a public way so you’re not embarrassed or shy. The arts bring us into a place we could never go to on our own. Reading Shakespeare or hearing an aria or listening to a foreign band takes you outside of that bubble of your world and helps you be a more understanding person.”