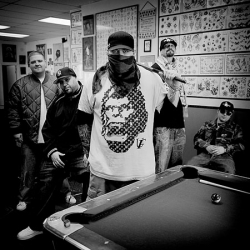 Rap supergroup La Coka Nostra has posted an mp3 of the track "Gun in Your Mouth" online here.

The group claims it "leaked" the track, but if the album's already out, and you own the tune, we'll argue whether it's a true leak. Aside from that, though, we're not gonna fuck with it. It's a double dose of underground street-action hip-hop.

Coka Nostra features all three members of House of Pain, MC-producer Ill Bill and Boston rapper Slaine, who just bowed out of the group's European tour to play a bank robber in director Ben Affleck's upcoming film The Town. We're guessing the movie's a lot like the song.