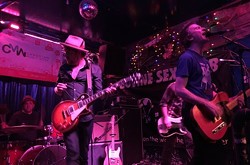 Ben Perlstein
When Replacements bassist Tommy Stinson formed the thrashy garage pop band Bash & Pop in the wake of the Replacements’ break-up, he intended the band’s debut, 1993’s Friday Night is Killing Me, to be a group effort. Instead, the album was more like a solo project.

“Me and Steve [Foley], the drummer, recorded all the tracks live,” says Stinson in a recent interview. He brings Bash & Pop to Now That’s Class on Monday, Jan. 16. The show is part of the band's first tour in decades. “Sadly, his brother [Kevin Foley], who played bass, wasn’t up to snuff on bass to record live. Steve Brantseg, although he’s a great guitar player, wasn’t able to read my mind for what I thought the songs needed. It ended up being easier for me to come up with guitar parts as I saw fit and that added a shit ton of extra work to that album. I’m happy it turned it out as good as it did, I suppose.”

Stinson says “the intent for that last one was what turned out this time” on the band’s forthcoming album, Anything Could Happen. He recruited “friends” who are good players and asked them to come in, giving them an outline of how the song goes and a melody that goes on top of the song. The initial lineup featured Luther Dickinson, Cat Popper and Frank Ferrer. As recording progressed, those guys got busy and Stinson recruited guitarist Steve “The Sleeve” Selvidge (The Hold Steady), drummer Joe “The Kid” Sirois (Mighty Mighty BossTones) and bassist Justin “Carl” Perkins to complete the record and embark on the subsequent tour in support of the disc.

“We hacked it out in a couple of takes,” says Stinson. “It was more of a live recording. That’s how some of my favorite records are done. The early Replacements records were done in a live fashion for the most part, sparing a vocal overdub here or there. That stuff was done live and pretty quick. It’s more enjoyable and more of a rock ’n’ roll way of doing it. It’s not a Tommy Stinson solo record where I overthought and overplayed everything.”

Stinson says he drew upon the last 20 years of his life for the songs. A tune such as the rollicking “Love on the Rocks,” a swaggering garage rock song about relationships gone awry, seems to reference both his personal and professional life.

"Someone asked me how much of it is real life stuff and do you feel like stuff sounds like Replacements or Guns N Roses or whatever," he says. "It’s all of the above. I couldn’t be in the Replacements and not have some of it sound like the Replacements. That’s how I grew up. I couldn’t be in Guns N Roses for 20 years and not have some of that rub off on me. It’s all kind of there. There are bits and bobs of real life scenarios and struggles in the record."

Back in 1998, Stinson joined Guns N Roses and played with the group until the original lineup reunited last year.

“You know, it was fun,” he says when asked about his days with the volatile band. “I’ll be honest, it was a great experience all around. I learned a lot of things about being in a collaborative setting with some people I might not normally play with. But it was an interesting learning experience. Overall, it was a good gig for me. I learned a lot about myself in the process, whether it was tolerance or humility.”

He also looks back fondly on the short-lived Replacements reunion tour that took place last year.

“We set out to have fun with it and make people happy,” he says. “Obviously, we were going to get paid for it and that was good too. We also set out to make a record and hopefully keep it interesting for ourselves as well. We kind of screwed ourselves in that a little bit. I think we could have made it interesting for ourselves if we added some of the deep cuts and weirder stuff that people might not have wanted to hear but we would have liked to have played. We had fun with it but we got wore out playing all the same hits that people wanted to hear. We got tired of playing that after awhile and I think it showed. We lived to tell the tale, that’s the good part of that.”

Stinson says he imagines Bash & Pop will tour and record regularly now that it’s finally delivered a follow-up album to its debut.

“We’re definitely going to do the whole fucking record cycle and that means playing for the next 15 months,” he says. “So far, people seem to be liking the record. They’re playing it on the radio, and I don’t think they played the first Bash & Pop album on the record. It’s a funny thing. I turned 50 and suddenly people are playing my music. Lucky me but now that means I have to fuckin’ work.”