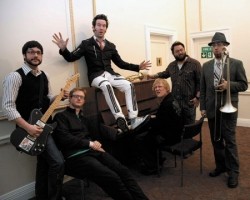 Anyone who watched MTV in the late '90s knows Reel Big Fish. The California band has been a mainstay in the music scene since singer-guitarist Aaron Barrett started the group in high school. Even though interest in ska waned over the years, Reel Big Fish has continued to pack concert venues and release an impressive amount of music, including six full-lengths, an EP and a live album. The band is also known for its cover songs and has a 10-track covers disc, Fame, Fortune and Fornication, slated for release later this month.

When last summer's Vans Warped Tour ended, the band went into the studio and recorded the album in about two weeks. Barrett chose the tracks and produced the disc, which will also be available in limited special-edition vinyl. Not only does Reel Big Fish cover ska/reggae singer Desmond Dekker's "Keep a Cool Head," the band also branches out with John Mellencamp's "Authority Song," the Eagles' "The Long Run" and a pair of tunes by Poison. "I think it's the ultimate mixtape for a relationship [Barrett] was a part of, so I think he had a lot to get off his chest," says trombonist Dan Regan. "It's a core sampling of what influences him as a songwriter." With a new album, a world tour with Streetlight Manifesto and plans to record a new album in 2009, the band known for its anti-music-industry youth anthem "Sell Out" has grown up. Pretty impressive for a group that formed just to get girls.

"The guys who started the band, they didn't really play instruments. They were just like, 'Well, maybe if we say we're a band, you know, we can get girls,'" says Regan with only a hint of sarcasm.

After numerous lineup changes, Reel Big Fish today includes Barrett, Regan (who's been a member since 1994), drummer Ryland Steen, trumpet players Scott Klopfenstein and John Christianson, and bassist Derek Gibbs. In 1995, the band self-released their first album, Everything Sucks, which established them in the ska scene. But it was 1996's Turn the Radio Off and the album's single "Sell Out" that expanded their fan base and netted them MTV and radio play. Reel Big Fish went on to release the Keep Your Receipt EP and the full-length Why Do They Rock So Hard? before issuing Cheer Up! in 2002 on Jive Records. But when Jive became the home of 'tween music stars Britney Spears, the Backstreet Boys and 'NSYNC, Reel Big Fish began to feel disenfranchised at a label that no longer cared for the band's music.

"It got really frustrating for us to have to pass our ideas through them," says Regan. "In their defense, they were frustrated with us because we're little tyrants."

When Reel Big Fish were dropped from the label in 2006, they gladly left. Since then, they've self-released two albums, Our Live Album Is Better Than Your Live Album and Monkeys for Nothin and the Chimps for Free. After more than a decade and a half together, Regan still isn't sure how the band has managed to keep going. Although all the band members are in their 30s, the fans are still teenagers. Regan said it's the kind of music that gets passed down by siblings.

"It's like pot." says Regan. "It's like the gateway music for kids. They can't go to bars yet. They just got their driver's licenses, and so they want to blast something really loud and hang out in a Denny's parking lot, and I guess we're the soundtrack for that."