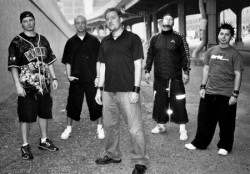 When Gatlin split in 2004, it was the last unsigned local band that could still pack big clubs like the now-shuttered Odeon. But after two albums, two demos and a handful of major-label showcases, the Cleveland metal quartet felt it had taken things as far as it could.

"We knew we still weren't going to get signed," explains frontman Jon Drake, taking a break from his day job as a Medicare account manager. "We had a good draw, a good following, a good reputation. And rather than beat it into the ground and become a band where people say, 'I remember when they used to draw a lot of people,' we were like, 'Let's just go out on top.'"

Most of the Gatlin guys have continued collaborating in modern-rock band APG, with former members of Another Path (APG stands for A.nother P.ath G.atlin). The uplifting phrase "Another Path," combined with the old slogan "Gatlin 3:16," feeds an enduring myth about Gatlin: that it was a Christian band. It wasn't. The "3:16" was copped from wrestler Stone Cold Steve Austin's catch phrase ("I don't know what John 3:16 says, but Austin 3:16 says I just kicked your ass!"). Gatlin, however, were far from tough guys. Recalls Drake, laughing, "A couple of club owners thought we were so much easier to deal with than other bands; they thought we were a Christian act."

Launched in 1994, Gatlin did have a positive streak, as evidenced in the band's self-described "Jedi metal." The tag was shorthand for the hooky nŸ-metal on display in original rippers like "Reflection" and a cover of Genesis' "Land of Confusion." They cut their teeth gigging with metal and hard-rock bands like Medieval and Cryptkicker. In 1999, they broke Peabody's presale record of 323 tickets for the release show of their sophomore album Forget Forever. This weekend's concert is the latest in an ongoing series of relapses. It's not a exactly reunion.

"We don't really say that we broke up," says Drake. "Bands break up and they go their separate ways. We knew we had gone as far as we were going to. We were always honest about our music, and we didn't feel like it was going to happen. So we said, 'Let's just do reunions as we feel like it, and go ahead with other projects.'"

The Peabody's show will include all the lineups. Gatlin plans to play its entire discography in a two-hour set featuring everyone who ever played in the band (except late-era guitarist Patrick Ols, who's busy gigging and recording with local pop-rock diva Jackie). Fans will see guitarist Don DeBiase, who went on to become one of the city's best producers. Bassist Kenny Irizarry and drummer Steve Lockhart will return from Florida, where they still play. Irizarry gigs with metal band Osyrus; Lockhart studies audio production. It won't be the last you'll hear from Gatlin: The last active lineup has continued writing and rehearsing material and plans to record eventually.

If you like the concert, you can bring the songs home. The band will sell a five-disc, no-frills collection at the show. It's a complete set of its recorded work, including albums and demos, plus unreleased live and studio material, for just $10. The CDs are cheap, and so are drinks and admission. (Print a flyer from MySpace.com/Gatlin316rocks, and there's no cover charge.)

"We figure, after being around for 10 years, the fans have been kind enough to us to pay their money, to buy the CDs, to come to the shows," says Drake. "And since it's not a viable working band and we don't need the money, we'd rather give something back to the fans. The fans really created Gatlin. So come see the band you helped build."