The dangerous devolution of video vixens.

Send a News Tip
The Man 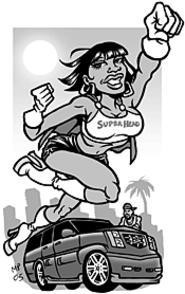 The book is one hell of a beach read. It charts how Steffans appeared in a number of rap videos, began fraternizing a little too intimately with the stars, and took a destructive path through drugs and indiscriminate sex as she devolved into her persona as "Super Head," a lady whose name needs no explanation.

Datwon Thomas is editor-in-chief of King, a New York-based men's magazine that profiles video vixens. He notes that Steffans' story is tragic, adding that it portrays an extreme side of an industry that is typically less glamorous, less lucrative, and less dangerous than she describes.

"I think Karrine had a unique experience that not too many women had at that level," he says. "[In the book] she's saying step one can lead to step two and that type of thing, but I think she was on step 12."

Thomas describes an industry that is largely underpaid. The average video vixen is not getting flown to Los Angeles and New York; she might even be catching a bus down to the beach for a day of boring, tedious work on a video that never makes it to cable. But the brisk sales of Confessions reinforces the most lurid and negative stereotypes about video vixens: They're loose and fucked up, with money to burn.

But it would be disingenuous to lay the blame solely at hip-hop's doorstep. Damn, when you really think about it, the decline of Western female civilization is all Duran Duran's fault. The group kicked off this whole mess when it released its raunchy video for "Girls on Film" in 1981, the year MTV launched. The band set the infinite loop in motion, and its themes are still the axis around which these videos rotate.

It's a long way from the pillow fights of carefree Duran girls to the travails of Super Head, though. And young ladies looking for role models in music videos are still crazily malnourished, with little relief in sight. It takes more than a few girl-power clips from Gwen Stefani, Missy Elliott, and Kelly Clarkson to combat the faceless army of clapping butt cheeks.

"A lot of those [ideas] come from the artist, meaning the artists want that," says Mor, who has also directed narrative-style, unvixenly videos for Nas and John Legend.

"It might be their first video, and they want to do what they've been watching. It's like a vicious cycle: 'I want the ho's in my video, and I wanna look like a pimp in my video.' But yo, we've done the chicks-in-bikinis-by-the-pool scene a million times!"

MTV is doing its part to encourage other themes in music videos by rewarding people like Mor and T.I. with VMA nominations. But on the other hand, "U Don't Know Me" faces stiff competition from vixen-strewn clips such as the Ying Yang Twins' "Wait (The Whisper Song)" and Snoop Dogg's "Drop It Like It's Hot." Will the booties have it? Only the MTV gatekeepers know for sure.