Godsmack Concert at Jacobs Pavilion at Nautica Adheres to Formula 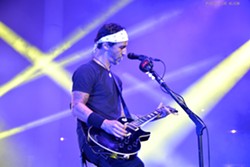 Joe Kleon
The late ‘90s and early ‘00s were a curious time for the hard rock scene. In the wake of the success of grunge acts such as Nirvana, Alice in Chains, Pearl Jam and Soundgarden, a slew of bands sprung up that derived their sound from those bands. Godsmack came of age during that post-grunge period and reaped some serious dividends. Albums such as Faceless, IV, and The Oracle all shot to the top of the charts upon their release as the group sold some 20 million albums; the hard rock act's music became a staple on rock radio. The band headlined arenas (and even played Wolstein Center back in 2006).

Flash-forward to the present day and the band’s popularity has decreased. Like-minded peers such as Creed have dissolved. And yet, Godsmack remains a rock festival favorite and last night played to an enthusiastic crowd of about 3200 at Jacobs Pavilion at Nautica. While many critics declared last year’s 1000HP to be the best Godsmack album to date, it doesn’t deviate much from previous efforts and the band adhered to formula for the 100-minute performance. You can see a slideshow of photos from the concert here.

The concert began with a short video featuring the Godsmack guys as they hung out backstage at a concert and tried to avoid a couple of groupies. After that, the group cranked Dropkick Murphys “I’m Shipping Off to Boston” over the house PA. It all made for a rather protracted start to the show.

When singer-guitarist Sully Erna and crew finally arrived on stage, they quickly delivered a few songs from 1000HP before launching into the moody mid-tempo rocker “Keep Away.” Heavy percussion and distorted guitar distinguished “Cryin’ Like a Bitch” and Erna’s snearing vocals were on point for “Straight Out of Line.” For “Something Different,” a tune from 1000HP, Erna encouraged fans by telling them, “I want you to lose your fucking minds.” The studio version of the song features strings and sounds like latter day Metallica, but the live version came off much softer and sounded more like a Foo Fighters track. Still, it was one of the concert’s highlights.

Toward the set’s end, the band played hits such as “Voodoo” and “Whatever,” erie tunes that sounded derivate of Alice in Chains, as Erna and drummer Shannon Larkin engaged in an old-fashioned drum off. Erna stayed behind the kit for a roughshod rendition of the Ramones’ “Blitzkrieg Bop” but returned to lead vocals for a cover of Alice Cooper’s “School’s Out,” a track that seemed a bit out of place since school is actually “in.” As much as Godsmack adheres to a hard rock sound that hasn’t been popular for at least a decade, it deserves credit for playing with some finesse. The band’s secret weapon, drummer Shannon Larkin, takes his cues from Rush’s Neil Peart and expertly worked his entire kit during the performance. And guitarist Tony Rombola is a solid player too. If only the songs weren't so by-the-numbers nu-metal.

Like Godsmack, openers Breaking Benjamin look back to the grunge scene for inspiration. They even played a cover of Nirvana’s “Smells Like Teen Spirit” during their hour-long set. But aside from the melodic “Give Me a Sign,” little in their set left a lasting impression as they stuck with tried-and-true power chords and bellowing vocals.