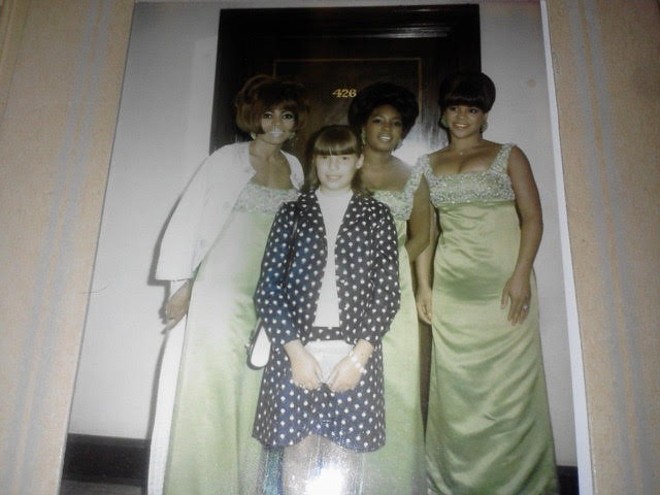 Courtesy of Amy Glin
Shelley Berger Rhodes with Dianna Ross and the Supremes.
When Leo’s Casino opened in Cleveland in 1963, it quickly became one of the city’s best music venues. Marvin Gaye, John Coltrane, Ray Charles, the Temptations and Otis Redding all performed at the place.

Redding actually played his last show ever at the club; he died shortly after performing there.

When the Hough riots happened in the late '60s, a mixed crowd still flocked to the club to see the Supremes. In fact, Dick Gregory once called the place “the most integrated club in America.”

Shelley Berger Rhodes, the daughter of co-owner Jules Berger, has some fond memories of the joint. Rhodes spent her childhood hanging out at the place.

“I used to help my dad count money when I was 8,” says Rhodes, who now lives in North Carolina.

One of her favorite memories was the first time she met Flip Wilson.

“I was 8 and I was sitting in the bar and he was sitting next to me with a drink,” she says. “I was born on the 13th, and Flip had a 13 on his arm because he was 13th of 17 children. We bonded over our lucky numbers, and we became lifelong friends."

After a Four Tops show, people lined up to get autographs. Singer Levi Stubbs came out and said the band wouldn't sign anything.

Stubbs made an exception, and she received an autograph that read, “To the boss's daughter.”

Recently diagnosed with ALS, Rhodes desperately needs help with her expenses. While she's received a multi-function wheelchair through insurance, she still needs a wheelchair accessible van to get around town.

She and her caregiver husband also have to move to an accessible apartment, and she needs a home health care worker.

Amy Glin, one of her childhood friends from Cleveland, has launched a GoFundMe campaign to help cover the expenses. She hopes to raise $50,000 and is currently accepting contributions through the site.