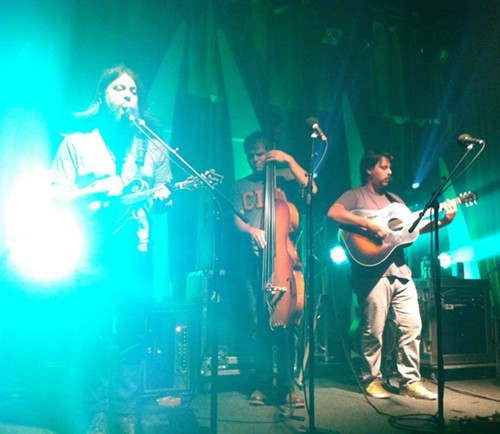 With a length season of summer festivals falling back in the rearview, Greensky Bluegrass kicked off what's sure to be a hell of a fall tour right here in Cleveland. The crowd at the Beachland was palpably enthusiastic, keeping up the high levels of energy alongside the band all night long.

Paul Hoffman gripped his mandolin as the band took the stage and cast joyful looks across the audience. "We missed you, Cleveland," he said. The crowd, of course, responded in kind. "We missed you too!" The band set right into the first frame of a two-set night, lighting into a non-stop evening of wonderful music. Each musician was in fine form.

The immediate realization is that there is a lot happening in each song - mandolin, banjo, bass, guitar, dobro. Lots of strings, to be sure. While other bands might push that notion to the point of being far too "busy," Greensky Bluegrass maintains a tight coherence throughout. There's a remarkable fluidity to the band's playing, as evidence in short, jaunty numbers and drawn-out jams all night.

The first set wrapped up with a tidy segue into Jimi Hendrix's "The Wind Cried Mary." As dobro man Anders Breck signaled the main chord progression of the song, the audience caught on quick and followed the band into bliss.

At many points, the jamming transcended the typical realm of bluegrass. Guitarist Dave Bruzza sent his melodic contributions into far-off space, crafting some of his solos to sound like alien languages. Likewise, Breck used his slide to turn the dobro into some sort of telegraph for the cosmos. He held down a massive jam in "Head Above Ground" late in the second set that featured each band member just absolutely dialed in to their respective instruments, churning out five-part improv. Amazing stuff.

Bluegrass as a genre is seeing a bit of a revival these days, along with the broad umbrella world of "Americana" music. To the uninitiated, it's a far cry from a lot of other music. Strings - and lots of 'em - are the dominant feature, of course, and there's a certain mood that the listener would do well to take on when tuning in. But no worries: The band will take care of you. There's a brutal honesty in the music of Greensky. They do what they do (and they do it really fucking well, mind you). The magic comes with the music.

It certainly did last night.

The next closest shows (w/r/t the Cleveland area) come Nov. 29 and 30 in the band's hometown of Kalamazoo, Mich. Below, find a video of the band throwing down "I Second That Emotion" from last night's encore: