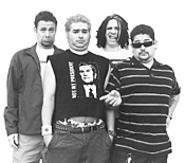 NOFX frontman Fat Mike wants you to be pissed off at the President.
Fat Mike would like to apologize for the whole Bush-Florida thing. His bad.

"After the 2000 elections, I was very unsatisfied, and I felt that if I had spoken out to my fan base more and tried to tell them how I felt politically, it might have made a difference, especially because NOFX has sold 50,000 records in Florida," Fat Mike (aka Mike Burkett) says of his beloved, notorious, and previously apolitical punk crew. "So I'm trying to use my influence or my celebrity as much as I can, and Punkvoter seemed like the right idea. I want hundreds of thousands of pissed-off kids, and I want them pissed off at the President."

As Ronald Reagan and Margaret Thatcher once inspired punks to chuck bottles at police cars and write irate protest songs, so has George W. Bush sparked punks to rise up and create Punkvoter, a political organization that hopes to boot him out of the White House. In the past, Republicans and Democrats have never had to worry about pandering to Mohawk-wearers; most of the punk voting bloc has been too disillusioned, apathetic, or high on glue to stagger out to the voting booth on Election Day.

But Fat Mike and Punkvoter want to change all that. Toward this end, NOFX has even lifted its long-standing press ban, appearing naked on the cover of Alternative Press (in a parody of the semi-infamous Dixie Chicks Entertainment Weekly shot), less to promote the band's recent disc The War on Errorism (a quantum leap forward politically from, say, Heavy Petting Zoo) than to flaunt Punkvoter's largely anti-Bush agenda.

In fact, "anti-Bush" is Punkvoter's only agenda. Its long-range goal is the mobilization of punkers into a traditional political coalition that can throw its weight behind a variety of issues near and dear to their hearts, such as protecting First Amendment rights and fighting corporate control of the White House and Congress. But as of now, the battle in November looms over everything, uniting punk-rock luminaries who ordinarily wouldn't mesh ideologically at all.

"Jello Biafra is a spokesman for Punkvoter, and he wants nothing to do with Republicans or Democrats," Fat Mike admits. "But he thinks it's a good vehicle to organize the youth of today. Of the 200 bands I called, only three said they didn't want to be involved with us. And kids have been really positive. All we get is e-mails from kids asking what they can do to help, and I tell them, 'All you can really do is convince a few people to vote that wouldn't have.' We're not trying to change the world or get all of America behind us. We're just trying to get our niche. There's no reason that we can't have at least a few hundred thousand members, at the very least. We can be an AARP or an NRA."

Thus, many Punkvoter bands set up voter-registration tables at their shows and sell "Stop Bush" and "Not My President" T-shirts and stickers, which are also available at Punkvoter.com. Fat Mike's Fat Wreck Chords label also plans to release at least two Rock Against Bush compilations that will benefit Punkvoter, with the money fueling advertisements in music magazines and possibly TV commercials, in which various punk-rock celebrities will attack Bush's policies directly. The first volume, which hit stores this week, features such big names as Social Distortion, the Offspring, and Ministry.

Punkvoter will also have a booth at the Warped Tour, with six member bands (including NOFX) performing and passing out DVDs like Uncovered: The Whole Truth About the Iraq War, Rock Against Bush CDs, and Punkvoter literature. But signing up voters remains the org's primary mission, and so far, evidently, it's going pretty well.

"Punks have been lining up at the voter registration tables at our shows," says Thomas Barnett, singer for the Punkvoter band Strike Anywhere. "Everyone feels the urgency of this particular voting year. In the past, maybe they felt like voting didn't matter, that it was just a contest between rich men. A lot of them think that it's a distraction from getting real work done in communities and trying to have a broader base of education for social change. But you can argue that when your President is much less horrible and irresponsible than the current one."

Some might criticize Punkvoter for being defined more by what it's against than what it's for -- by citing Bush's ouster as its main goal, isn't Punkvoter basically working to elect John Kerry and the Democrats, whose political views may differ drastically from those of the average punk? Other punks may vote for Ralph Nader or the Green Party candidate, but as 2000 famously showed, that very well might help Bush. So is Punkvoter really pursuing a punk-rock agenda, or is it more a sign of the times -- another left-wing organization flying the pragmatic anyone-but-Bush banner?

"I think that Punkvoter.com isn't the place for an articulation of a political agenda," Barnett says. "It would probably turn off a lot of people. I think just getting people to vote, and vote against Bush, would be a good idea at the moment. I think it's more of a gateway for people to start coming to terms with their activity in the political process. Endorsing a candidate or a political party would be counterproductive right now."

That's not to say these guys haven't tried. Punkvoter's attempts to make inroads into the political arena began when it sent a delegation to the Iowa caucuses that included radical guitar-slinger Wayne Kramer, formerly of the revolutionary Detroit band MC5.

"We tried to horn our way into the action and carry the message of Punkvoter," Kramer says. "The Kerry and Edwards people saw the Mohawks and ran for their lives. They didn't want to have anything to do with us. Kucinich, of course, embraced us to some degree. We had a press conference, and we had the governor of Iowa stand up with us and tell us that he had listened to his first punk-rock music the night before. His son had turned him on to Pennywise, and he said, 'I heard three songs, I think. But the truth is I'm really more of a Phil Collins kind of guy.' Anyways, the governor was a good guy. He saw our point, that young people need to take a role in what is going to be their lives. They're the ones that are going to Iraq to die."