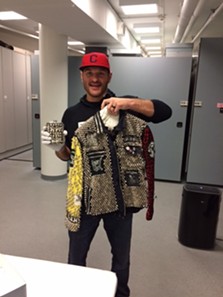 UFC heavyweight champ Stipe Miočić and the “Countdown to UFC 211” film crew spent the better part of the week in Northeast Ohio filming promotional content that will air on FS1 (Fox Sports 1) leading up to Miočić's next fight, UFC 211, which takes place on Saturday, May 13, in Dallas (and can be seen live on Pay-Per-View if you can't make the trek to Texas).

They concluded the shoot today at the Rock Hall where Rock Hall CEO Greg Harris took Miočić on a personal tour through museum and even gave Miočić access to the Rock Hall's "vault" to see a few items that local rapper Machine Gun Kelly has recently donated, including a leather jacket. Miočić and MGK know each other well. Miočić's walkout song is Machine Gun Kelly’s “Till I Die.”

Miočić spoke to us about his love of rock and hip-hop and talked about his connection to MGK. You can see MGK's jacket hanging on the coat rack next to him.