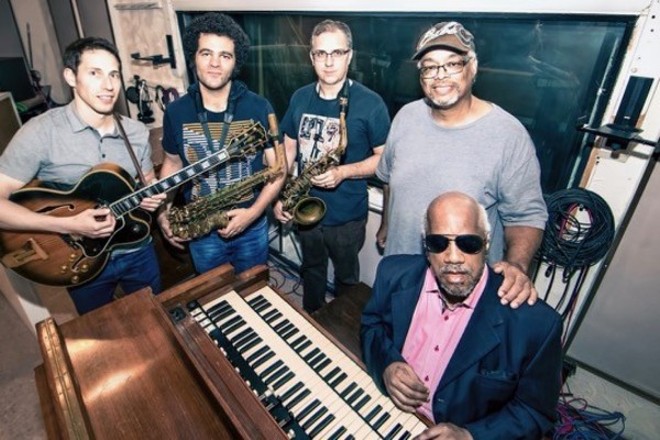 Last year, the group dropped its terrific debut album, Soulful Days. Songs such as the groovy "Sir Charles" have a Booker T. Jones vibe to them thanks to the beefy Hammond organ that drives them. The band is equally comfortable playing pensive tracks such as "Little Girl Blue."

In this recent phone interview, Foreman, Rockingham and Rothenberg talk about their careers and the making of the album.

Talk about your backgrounds. Where did you grow up and what kind of music did you listen to while growing up?
Foreman: I was born in Chicago, and I grew up on the Southeast side, what they call the South Shore area. According to my mother, I started playing music when I was 2. I always loved music. I have always loved jazz and blues. In college, I was a music theory major. I was the only blind person in the class. You had to create your own "blind services," which is what we call it. If there was an assignment and you had to listen to something, you’d have to pair up with other classmates to know what to do. We’d get together and that’s how I got through it. The books were not in braille and I had my material read to me and taped it when I needed to.
Rockingham: My dad was a Hammond B-3 player. The music I listened to was Jimmy Smith and Jimmy McGriff. I always heard my dad play those guys. There was always a B-3 in the house too. I guess that started my love for that instrument. I went to public grade school and then went to a fine arts high school in Michigan called Interlochen. When I got to Interlochen, there was a guitar player that turned me on to people like Pat Martino. Then, I started listening to Miles Davis and John Coltrane. As I got older, I branched out more, but my love for the B-3 continued. My love for the B-3 will never, ever change, but like all other jazz listeners and music enthusiasts I listen to everybody now.

Chris and Greg, talk about you first met?
Rockingham: After my dad got tired of playing, I got to meet Chris. First, we became great friends, and then once played together, we noticed we liked the same music. The relationship grew from there. He lives way on the South side. He would take the train to my house and we’d sit and play all night. Because my dad played, I own three B-3s and six Leslie speakers. We would listen to music and play and eventually decided we wanted to form something. If we couldn’t get together in person, we would rehearse over the telephone. We would be on the phone for hours working on arrangements. That’s how stuff started with us.
Foreman: Our first gig was on Oct. 12, 1984 at a place called the Taste Entertainment Center in Chicago. It was fun.
Rockingham: It’s a big giant dance bar. On the other side of the dance club, there was a jazz room called the Zodiac Bar. There was a stage behind the bar. He came to fill in for my dad. We played a few tunes and had a whole lot of fun. That was the day that I started to learn how to play with Chris and realized the differences between different organ players and how to play with them. After playing with my dad and then playing with Chris, that’s the first time I really noticed the differences. It was really informative.

Talk about playing with the Deep Blue Organ Trio and what that was like?
Rockingham: That wasn’t the first band we played in together, but it formed in 1991 or 1992. There is a guitarist in Chicago, Bobby Broom, who played at a club around the corner. We played at a club near that, and he would come and listen to us on his breaks. I would come and check him out on our breaks. We met and he said that he loved the organ thing too. We played a couple of shows and realized we could do something. We didn’t have a name but collectively came up with the name Deep Blue Organ Trio.

How did Soul Message Band come together?
Rockingham: Lee would sub for Bobby [Broom] a lot. He would take time to learn the material we were doing, so that’s who we’re playing with now. He’s a great guy and a terrific.
Foreman: He’s a great friend too.

Lee Rothenberg is much younger than you guys. What’s it like to work together?
Rockingham: I find it refreshing. It’s great because of the energy he brings. He’s young and strong, he can lift that B-3. It won’t be so hard on me now. He puts in the work and the time. You never have to worry about Lee.

Lee, what's it like to play with Chris and Greg?
Rothenberg: Take any of the best organ groups —  Jimmy Smith, Jimmy McGriff, Jack McDuff and “Groove” Holmes — throughout history. This is like me playing with those types of guys with their experience and musical knowledge and authenticity. It’s like being in a band like that. I learn so much from them. In a lot of ways, it’s an apprenticeship and now it’s like we’re a group.

The group released its first album, Soulful Days, last year. Talk about the making of that album.
Foreman: It was a great time and it was a learning experience, going from one style of music to the other. We had a lot of things to think about on our end. We wanted to make sure it sounded strong and confident and clean and soulful.
Rockingham: This is the first time that Chris and I put out a record that had saxophone. Before, it was just organ and guitar and drums. Having the saxophone opened up different avenues to play differently. Just having two additional players was something that was so different. They were different types of tunes too. We didn’t come up with anything new but we enjoyed playing stuff we grew up hearing and that’s what we tried to do.
Rothenberg: It was very humbling. I get nervous in the studio, but these guys made it so easy. It was great to go in there and trust who you’re playing with. There wasn’t any pressure from the recording studio or the band. It was just self-pressure. I was playing with the dream band. It was a real honor.
Rockingham: The dream band part is his opinion. We definitely don’t act like that. We’re happy playing with him as well. We get nervous and all of the above.

Where did you go to record and what was that like?
Rockingham: We did it at the Delmark studio. They own the studio, so there were no time constraints. We were able to go in and play. It was really relaxed.

What will the live show here by like?
Rockingham: In this particular situation, there’s definitely a lot of energy. With the organ and as great as a player as Chris is, it’s organ-dominated, and that’s how we want it to be. We try to engage the audience. We don’t want to just go from song to song and not include the audience. We like to try to present that as a show. We only had about 20 minutes when we were [opening for] Steely Dan. That taught us to engage people.
Foreman: One of the things we would do is that I would wave my cane at the audience to get people involved, and we would interject a little comedy. Greg made a statement the other day that his sight was going, so I took my glasses off and asked if he needed them. I said that I didn’t need them because I could always get another pair. It gets the audience riled up.
Rothenberg: We’re steeped in the tradition of organ and the repertoire. We want to put something original on it too. Our goal is to be soulful and connect with the audience on a soulful level. We have something for everyone. We got the funky stuff. We got arrangements of pop tunes from the ’70s too.