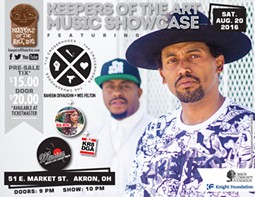 The Keepers of the Art Music Showcase Concert Series, an “inspirational and thought-provoking meeting of progressive minds designed to provide heightened stimulation through underexposed artists and their music,” regularly brings national acts to town.

The group’s mission: “to socialize and entertain the masses through soulful meetings that showcase soul music and next level hip-hop music.”

The organization has just announced its latest concert. The socio-political super group the CrossRhodes, a group that consists of international recording artist Raheem DeVaughn and singer, songwritier and emcee Wes Felton, will play their new album Footprints on the Moon on Saturday, Aug. 20, at Musica in Akron.

Critics consider their 2004 debut, The Invitation, to be one of the most influential records in underground hip-hop and R&B; it features "vivid storytelling and intrinsically soulful vocals about socio-political issues while praising the gospel of love absent self-pity."

The Goddess emcee Sa Roc will also perform at the Musica concert. Tickets are $15 in advance, and $20 the night of the show.