Youtube.com recalls what rockers wanted you to forget. 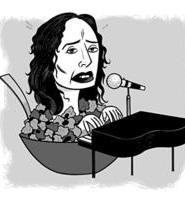 Mike Gorman
Everyone starts somewhere, and if there’s anything fame in the information age has taught us, it’s to destroy the film.

Of course, Scott Stapp is not the only one with embarrassing footage out there. Besides MTV-video rips and late-night-TV appearances, youtube.com contains a treasure trove of rare music videos of rock stars in “compromising situations” from early (or late) in their career.

Who: Tori Amos
Now: Flame-haired, piano-playin' mom and storyteller
Then: Trying to make ends meet by "acting/singing" in a TV commercial for Kellogg's Just Right cereal
URL: youtube.com/watch?v=6iZ8ys-utfs
Unintentional Hilarity: Where to start? Amos' creepy, orgasmic enthusiasm for a spoonful of the stuff, or the painfully '80s ad jingle?
Redeeming Quality: Mmm. Cereal.

Who: Maynard James Keenan
Now: Dark underlord of twisted prog-metallers Tool
Then: Intense mullethead fronting a garden-variety new-wave rock band
URL: youtube.com/watch?v=jKXr40gl9_k
Unintentional Hilarity: A toss-up between his skin-tight leotard (!) and the spoken-word slam-poet breakdown in the middle, featuring mic echoing on the word "free."
Redeeming Quality: At least it's not A Perfect Circle's cover of "Imagine."

Who: Metallica
Now: Sad parody of a rock cliché masquerading as a hard rock band
Then: One of metal's truly legendary acts
URL: youtube.com/watch?v=qML5YMsJhRg
Unintentional Hilarity: Seated in the front row of the balcony, Kirk Hammett, Lars Ulrich, and James Hetfield proceed to rock out to Avril Lavigne's cover of their song "Fuel," proving you don't have to be young and/or stupid to look like morons.
Redeeming Quality: Lavigne renews the hope of cover bands and musicians everywhere: You don't have to be talented to have a career.