It's the crap, crappiest season of all. 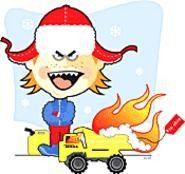 Mike Maas
When asked about favorite Christmas, Hanukkah, or Kwanzaa memories, most people remember the good times. You know, the stuff they write songs about to get you into the holiday spirit -- deck the halls, fa la la la, and all that jazz. Now, ask a musician the same question, and instead of poignant tales of seasonal mirth, you'll get memories of embarrassment and crime. There's a lesson about artists wrapped up in there somewhere, but it's a little too tragic to consider. That said, thank a secularized Santa you're not one of these guys.

Pete Wentz (Fall Out Boy): "Seven years ago, I was living in an apartment and came home for Christmas, but no one was getting along. That was the year I'd decided to stop wearing big pants and wear littler pants. Tighter pants. I got called "gay" and "a woman" the entire night, so I left and went over to my friend's house and had Christmas with his family. I don't think they knew what to do with me, because I'd just shown up there, so they just wrapped a bunch of random stuff they had in their house and gave me other people's presents, like, 'Oh, this is for Steve, but it's for you now, Pete.'"

Evil Jared Hasselhoff (Bloodhound Gang): "About five Christmases ago -- so pre-September 11 -- I was coming back to the U.S. from Germany, where I'd bought a butterfly knife. Perfectly legal in America and Germany -- but we had to go through Heathrow Airport in London. When they found it in my carry-on, they asked, 'What do you plan to do with this?' 'It's a butterfly knife. I don't know. Um, spread some butter on my toast? If it's illegal, just take it.' 'This is an assault weapon, sir. It's a very serious crime.' 'Are you kidding me? Take it.' 'No, no, sir. You're going to jail.' So they arrest me and take me to Heathrow jail, and I'm rotting there for six hours as the cops yell at me like I'm a terrorist. Meanwhile, I'm trying to tell them that I'm just some stupid hillbilly. I got my first butterfly knife from my dad when I was 13. When they opened my wallet, they found my NRA ID and my carry permit and asked, 'What's this?' 'It's my carry permit.' 'What's that mean?' 'Back home, I can carry a gun anywhere I go.' 'Really?' 'Yep.' 'So you really are just a dumb hillbilly?' 'That's what I've been trying to tell you.' And so they put me on the next flight, letting me go."

Fefe Dobson: "One Christmas, I got up at six and waited until my mom finally got up, around noon. I was practically in tears by then. But the first present was from my sister and as big as a six-year-old child, so I was excited. I ripped through the paper and opened the box, and there was more paper. I'm thinking, 'All right, it's breakable. Must be expensive.' As I got to the bottom, my hope started to run out and there were tears in my eyes. All there was was a bright, shiny copper penny. It wasn't even like we believed in pennies being good luck or anything. It was just to laugh at me."

Gavin DeGraw: "Here's what happened: I got a Tonka dump truck for Christmas when I was nine. My older brother, Joey -- he got a matching truck. But he took my truck, and he called me outside when he had it ready to go. So I went outside, and there was a ball of flames; he'd filled up the whole back of my Tonka dump truck with kerosene. He pushed it down the road and said, 'How do you like your truck?'"

Steve Bays (Hot Hot Heat): "When I was eight, I was in the school Christmas play. I just remember insisting that I dress up like Michael Jackson for this Santa's workshop scene. At the time, that was my whole thing. When I think back now to what I thought Michael Jackson's aesthetic was, though, it doesn't really make sense. I had these red and black fingerless, studded gloves, which were totally not a Michael Jackson thing at all. And I had these random novelty gold pendants I was wearing that was more of a Mr. T thing. I remember I got into a fight with my parents too, because I insisted I had to wear these jeans with tears in the knees."

Shooter Jennings: "I had this third parent, Maureen, who took care of the house and the kids while my parents [Waylon Jennings and Jessi Colter] were on tour. She got this catalog from Japan or somewhere, from where the next Super Power toys were coming out during the next year. She was going to try to get them before their release and give them to me for Christmas. So she's calling and sniffing around, and, all of a sudden, the FBI calls her and says, 'How do you know about these toys?', thinking that she's with another company and it's some sort of espionage. They basically threatened her for even knowing these toys are coming out. And she's just like, 'But I have the catalog.'"