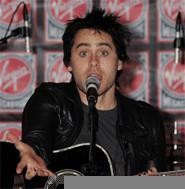 Getty Images
Movie fans and music fans agree: Jared Leto rocks.
Actor Jared Leto (Requiem for a Dream, Fight Club) has been fasting for four days. Except for water, fresh lemon juice, and cayenne pepper, he expects to consume nothing anytime soon. This isn't one of those trendy Los Angeles diets, though; he's burning off the staggering 62 pounds he packed on to play John Lennon's assassin Mark David Chapman in the new film Chapter 27, which just wrapped filming. "I got gout in my left foot because of the weight. Don't do that at home," he warns, laughing. "But we're back now" -- "we" being his band, 30 Seconds to Mars -- "and we start touring in a fucking week. I'll adapt."

30 Seconds has been the subject of more than a few dismissive smirks because, well, an actor with one of the prettiest mugs in Hollywood fronts it, and while rappers have proved deft actors, actors have produced more wannabes than actual rockers. (Russell Crowe, Dennis Quaid, Kevin Bacon, we're looking at you. ) Nevertheless, 2005 was a blue-ribbon year for musically inclined actors to defy expectations, from Juliette Lewis (Juliette and the Licks) to Jada Pinkett Smith (Wicked Wisdom) to Balthazar Getty (Ringside). Oh, and Jared Leto, of course. Turns out that when he's not making out with Colin Farrell in Alexander, Leto's often shredding with his older brother, Shannon -- something they've been doing since they were kids.

"We've always had 30 Seconds to Mars as part of our lives," says Leto. "It's something we used to do as a very prog-rock approach. We weren't interested in building a following or even having a name. We'd play shows and change our name every time."

The band's self-titled debut came out in 2002, with Shannon pounding away on the skins and Jared playing everything else, but it turned out a bit too convoluted and perhaps overambitious.

"I think the first album is very special, and it's kind of a world that was created for a lot of different reasons -- a world filled with metaphors and different layers and levels to uncover, kind of an obsessive fantasy," Leto says. "But it was always very, very personal to me. That record was a lot of me just sitting in front of a computer on some kind of recording device and just creating. There was no band." He pauses. "It was a very dark experience in many ways, very isolating. The second album was kind of a reaction to that."

For the follow-up, Leto added a new lead guitarist and bassist -- Tomo Milicevic and Matt Wachter, respectively. Milicevic was already a 30 Seconds devotee. "I was a superfan," he says. "I didn't miss a show within 500 miles of Detroit."

When it came time to record 2005's A Beautiful Lie, Milicevic and Wachter -- both of whom, like the Letos, had been playing metal since their early teens -- weren't sure what to expect. "After years of these two brothers doing it one way, the formula's changed, and suddenly there's these two other people," Milicevic says. "We didn't know how we were going to fit in; we didn't know if Jared would even want our input."

But Leto reveled in the collaboration. The result is a more confessional, transparent album than 30 Seconds' debut, the new-wave overindulgence tempered by '80s guitar theatrics and a sound big enough to eclipse a Hollywood soundstage. At least, that's what Leto hopes.

"In our country, actors become presidents. I'm just in a band," says Leto. "The interesting thing to try to decipher is why people want to criticize someone making artistic choices. I'm not going to war. I'm making music."

For Leto, making music is -- like making movies -- something he loves to do, and he has no time for armchair quarterbacks who question his motives or dedication. "This is something I've always done," Leto says. "I'm very proud of the films I've done and the music I've made."

Not buying it yet? Well, consider: Leto turned down a part in Clint Eastwood's Flags of Our Fathers to go out on 30 Seconds' last tour. Seems the musician in him is a lot more concerned about quashing any comparisons to Crowe's 30 Odd Foot of Grunts than starring in Oscar bait. The rest of the band did their best to talk him out of it too.

Apparently, some people do.