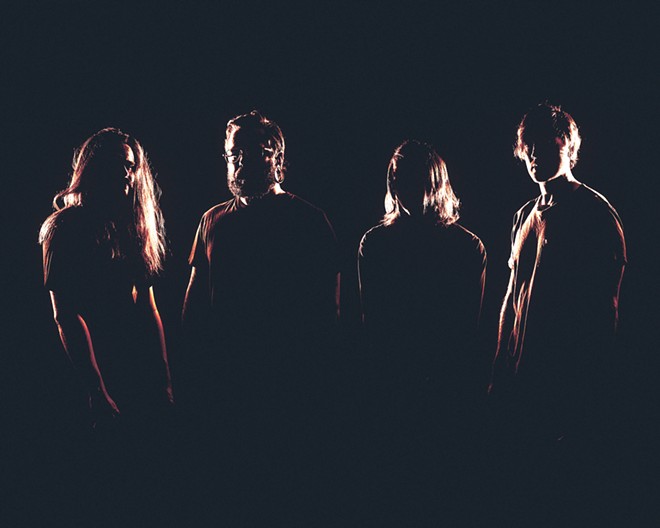 Charles Barth
Holy Fawn.
Before they formed the shoegaze/metal/post-rock act Holy Fawn, bassist Alex Rieth, guitarist Evan Phelps and singer-guitarist Ryan Osterman all worked together at a Guitar Center in Phoenix. After Osterman’s band Owl & Penny came to an end, the three decided to jam together with drummer Austin Reinholz. At that point, Rieth says he knew the group had something special.

“We bonded over a shared like of music, and our personalities really meshed with each other,” says Rieth in a recent interview from his Phoenix home. Holy Fawn performs on Wednesday, Sept. 14, at the Foundry in Lakewood. “I listened to a lot of metal. I think the first CD I ever owned was the Locust, which really blew any conception I had about music out of the water. I liked Pantera, Megadeth and Metallica. I discovered modern metal with Lamb of God and Slipknot. We had a three-hour long instrumental improv jam session. From that moment, we knew we had something to work with. We just rode the same rhythm or melody, and it was definitely in the post-rock vein of things.”

After putting out an EP in 2018, the group really raised some eyebrows when it released its full-length debut, Death Spells, an ambitiously atmospheric album that drew from both metal and post-rock and comes off as a heavier Sigur Ros, the Icelandic post-rock band that Osterman idolizes.

“It took a while because we’re all neurotic perfectionists and as we were recording it, we moved a bunch and went to different spaces and our gear got better,” says Rieth when asked about the making of the album. “It took about two years to finish that record because there were so many moving parts. It was super rewarding. I have so many fond memories of putting that album together and watching it grow into the beast that it became. It was surreal when Lamb of God’s Randy Blythe named it his album of the year. I lost my mind. I couldn’t believe that. It’s rewarding to see it received the way it was.”

The band followed the album up with The Black Moon, an EP of tunes that Osterman wrote right after Death Spells.

“The biggest difference with that album was that we brought in Matt Bayless to record and engineer it,” Rieth says. “It was the first time with an outside producer. He’s done records with Mastodon and Isis — landmark albums. Getting to work with him was great. He’s in Seattle, but we recorded in Phoenix. He flew down for four or five days and he guided us in what we were doing.”

The pandemic forced the band to take a completely different approach for its latest effort, Dimensional Bleed.

“With Dimensional Bleed, we couldn’t craft the songs in a live setting,” he says. “Dimensional Bleed was written almost entirely in the studio. There are songs we have never played together as a full band. Production wise, we were a little looser. At the time, not knowing where the future of live music would be, we just wanted to make a really cool record with great atmosphere and would figure out how to play it live later.”

This time around, they enlisted Mike Watts (the Dillinger Escape Plan, Glassjaw, the Dear Hunter) for mixing and additional production and Mike Kalajian for mastering.
Mike Watts helped mix and engineer.

The first single, “Death is a Relief,” begins quietly but escalates before concluding with somber vocals that make it sound as if a children’s choir is singing.

“That was the first new song that came into the early phases of putting the album together,” says Rieth when asked about the track. “Ryan writes most of the record. He had this germ of an idea. We were happy with it. It’s one of our favorites on the album. It was a cool way to start out the process. With the vocals, a lot of it is both Ryan and Austin. Austin did a lot of singing on the album. Austin does the mixing too and will add layers. We did a lot of production work on this album. It’s his magic touch that’s contributing to the vocals you hear at the end.”

Rieth says the band is still getting its set list together and finding a way to work backing tracks into the set that will provide extra synthesizers and auxiliary percussion.

“Of the four of us, we have a wide variety of music we like," says Rieth. "Atmospheric music is maybe the one ingredient we all collectively love. We all enjoy it greatly. It comes naturally when we’re playing. Some of the songs we’ve played so often, we don’t even need to practice them. We’re still breaking in the new songs and putting in as much work as possible. I think the backing track will really beef things up.  We're really excited about the headlining run.”