After a two-year break, DJs Halo and Justin Long have reunited for a show at the Funky Buddha. 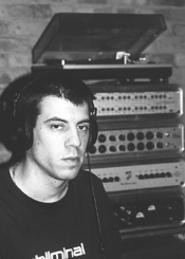 Halo: His kind of town, Chicago is.
It's been over 10 years since house music was first heard on the dance floors of the predominantly gay, black clubs of Chicago. Halo Varga and Justin Long, two Windy City natives who grew up together spinning at high school house parties and local raves, were there at the start. Since then, house music -- post-disco American melodies with deep bass loops, straight-up unsyncopated "four on the floor" beats, and positive grooves -- has become a global phenomenon.

"In high school, we used to play house parties, and this was way before there was even a rave scene," Long recalls. "It was like when Derrick Carter, Spencer Kinsey, and Mark Farina were throwing their parties. It would be in a secluded area, total word-of-mouth, with like 300 heads. Everyone was just jamming out and having a good time. And that's pretty much where it all started."

Now Halo, a globetrotting DJ who lives in Southern California, produces tracks for labels such as Siesta Records and Catalyst Recordings. Long, who still lives in Chicago, is fashioning his own stranglehold on the house market with nine years of residencies and production credits with the likes of the Modern Criminals and Halo himself. It's been a couple of years since the duo worked together in the DJ booth, but they're reuniting for a Thursday show at the Funky Buddha.

The better known of the two, Halo started DJing at 13, equipped with a pair of "used and abused" turntables from his father. By the time he finished high school, he was spinning with Long at a local club called Alcatraz.

"That's where it all began initially," Halo says of Alcatraz. "A lot of the DJs that came in from parties stayed and played -- all these really good house and techno DJs, like Terry Mullan and Derrick Carter. They used to play there all the time. Just growing up in Chicago, I was always around a lot of these house DJs, and that was the one thing that I loved."

Now 26, Halo lives in San Diego, and most of his success has come from his work for Siesta -- especially under the moniker H-Foundation, a collaboration with West Coast DJ Hipp-E. With H-Foundation, Halo plays deep, dubby tribal house sounds that strut sly building beats and rolling bass riffs.

"[My style] is kind of a mixture," Halo explains. "It's got a little bit of that Chicago flavor. I've definitely got my own style, but it's definitely got that Chicago influence. It's hard to explain. It's house with dubby, rolling, grooving tracks. It's just moving. Everything's moving. It's got kind of an organic feel."

H-Foundation's first EP, "420 Sessions," brought quick acclaim to the fresh production team and its label. One of its earliest products, the seminal "Hear Dis Sound," has become a blueprint for much of the current wave of dub-influenced house music. The track has appeared in DJ sets by Pete Tong and Carl Cox, and DJ Dan listed the EP as one of the top 10 of 1999. H-Foundation recently released its first double-disc set, dubbed Nite Life Vol. 2, which contains 24 tracks with such artists as the Mirror Boys, Aquatherium, and Crescendo.

Long got into the local house scene in early grade school. He began spinning at Chicago loft parties back in 1993 and tackled his first rave the following year. Over the past nine years, he has worked at Chicago clubs such as Red Dog, Smart Bar, Karma, Big Wig, Club Eden, and Red No. 5 with numerous residences and frequent guest spots.

"Just living in Chicago, I just started listening to the radio when I was young," Long says. "In about the fourth grade, I was listening to WBMX, which was when Farley 'Jackmaster' Funk, Risario, and all the original house DJs from back then were playing on the radio. And it just caught me."

Now a fellow budding beat digger, Long is building his r´sum´ with a slew of production credits. He worked with Sativa on a Tonic Recordings remix of Johnny Flasco's "Conduction" and with Akira Goes Bang and Modern Criminals. He describes his style as "somewhere floating on the line of techno and house." He's also teamed up with Halo, under the name Audio Espionage, to release an EP on Siesta.

Coming together for the first time in several years, the two are a bit cryptic about their reunion at the Funky Buddha. Long maintains that he and Halo just want to "party for a bit." And if you're unsure about the outcome, Long isn't going to beg for a big crowd.

"If you're reading this interview, and you find anything interesting about it, come check it out," he says. "If not, what can you do? Go home, watch The Simpsons, and smoke a bowl, man. 'Cause that's what life's all about. Word up."