I Love the ‘90s Tour Headed to the I-X Center 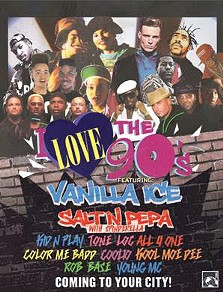 The inaugural edition of the I Love the ‘90s Tour features a revolving cast of acts including All-4-One, Biz Markie, Coolio, Color Me Badd, Kool Moe Dee, Kid ‘n Play, Rob Base, Salt-N-Pepa, Tone Loc, Vanilla Ice and Young MC. Promoters promise “an arena-sized dance party” as each show includes upwards of eight performers. Early reviews have praised the tour as a “once in a lifetime experience” and a “trip down memory lane with rap, hip-hop, smoke, lights and nostalgia.”

“We are so thrilled to be able to bring together some of the most iconic artists of one of the most pivotal decades for music,” says Universal Attractions Agency’s co-owner Jeff Allenin a press release. “After the incredible fan response to the first few shows, we knew the Tour had to go national."

The tour hits the I-X center at 7:30 p.m. on Thursday, June 30, and will feature Salt-N-Pepa with Spinderella, Vanilla Ice, Coolio, Color Me Badd, Kid ‘n Play, Rob Base and Tone Loc.

“We are thrilled to bring back some of the most iconic hip hop artists and trendsetters to the I-X Center,” says I-Center director of marketing Claire Anter-Vanidestine in a press release. “If you are a product of the ’90s, these songs definitely make up the soundtrack of your life. Each and every fan in the arena will be on their feet, singing along and reliving every moment as if it were being played from a mixtape on your boom box.”

Tickets go on sale at 10 a.m. on Friday, April 8. Reserved tickets start at $50 and a VIP meet and greet pass is available for $75 with a limited quantity available.