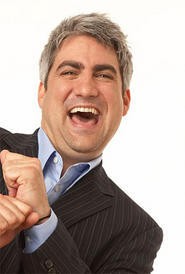 Hicks needs more chest hair and a gold medallion.
Taylor Hicks beat the ultimate odds when he won American Idol last year, but pleads the fifth when asked if he's a gambling man, then reconsiders.

"If you're in a casino, you might as well, right?" wonders the "Silver Fox," speaking via telephone from the Ameristar Casino in St. Louis, tonight's stop on his first solo tour with his eight-piece soul band.

What's more, he even admits that he's excited about being there. "I mean, people get paid in a casino. That's pretty tough to come by," he laughs.

Hicks is on tour at least through the summer, with very few days off. He's used to it, though, since he spent a lot of time on the road before entering the AI contest. "Nowadays, for me, the road is where I thrive," he says.

With the backing of the Soul Patrol, a nationwide fan club exploding with ardent members, each gig brings an overwhelming amount of support. You don't get the sense that Hicks indulges in groupies, however. He says that he unwinds on the tour bus by playing chess, and it's believable. And while his knowledge of the game won't approach Grandmaster status any time soon, it appears to have given him the side-stepping moves needed in the music industry.

Last year, Hicks went on a national arena tour with last season's AI finalists, while his current itinerary has him playing a smattering of casinos, ballrooms, and other intimate settings (like Cleveland's House of Blues). "That's what I wanted to do. I feel like I need to start small and get bigger. I understand the game. I understand the business. You have to grow and grow. That's key."

It's an astute strategy; he's not looking for short-term success, and a second arena tour this soon after his national debut could have been an easy fast track to quick, free-fallin' burnout. It's really hard to get larger when you have already received more votes to win a televised singing contest than any political figure does to win office, including the president.

"It's crazy, isn't it?" he asks, referring to America's appetite for a good tune versus a good leader. "I want to be a career artist, not a flavor of the month. What you do after you win [AI], you really have to take it and use it to your advantage. For me, I have to get the point across that I'm a real artist -- a performing, touring artist. It needs to start in the intimate settings, where you can really communicate that idea."

He draws parallels between the current version of his live show and Van Morrison's seminal live album from 1974, It's Too Late to Stop Now, which was recorded when Van Morrison was in his early 30s (as Hicks is now). After years of large-scale attention and shows, Van Morrison released the album at a time of renewal, starting small and getting bigger. Hicks says, "I like to draw that similarity right now because I think the same energy is there."

The music business has its well-documented treachery, and there's a public perception that American Idol probably doesn't offer the most generous recording contract to the winner. It's clear that Hicks is not one to sign blindly and has spent his years in music paying attention to the pitfalls, but did he have to stand up for himself when it came to his deal?

"Artistically I had to, but contractually, it was already a done deal. You know what you're getting into when you get into it."

Not sure whether it's comedic coincidence or a calculated cutoff -- but that's precisely when we're told that there is one minute left in the interview. A bit of elaboration on how he fought for artistic freedom would be great, but it's not to be on this particular day. There's also no time to sneak in a quick bark for Randy Jackson, a puzzled quip about Paula Abdul's zany brain-farts, or even an inquiry about why Simon Cowell likes to rub his own nipples.

Thanked for his brief yet gracious time, Taylor Hicks makes a concluding move that's rather different from most pop and rap stars who endure cattle-call interviews on daily tour stops. What he does is wonderful. He doesn't direct me or Scene's readers to go get his album, in stores now. There's no Taylor Hicks clothing line to hawk or branded beverage coming soon.

Instead, there's a far more pressing recommendation on his mind.

"Make sure you check out that Van Morrison album -- it's really good," he insists. "It's Too Late to Stop Now."