In Advance of Next Week’s Show at House of Blues, Elohim Talks About Her Group Therapy Tour 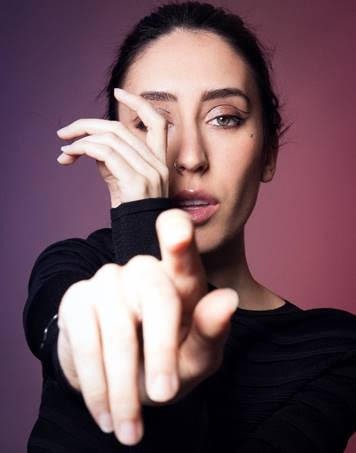 Courtesy of DRPR
A mental health awareness advocate, singer-songwriter Elohim has gone above and beyond to help people who struggle with issues of depression. A couple of years ago, she created a hotline as a way to assist anyone struggling. Those that need someone to talk to can simply text Elohim directly at the number on her Instagram page.

“I’ve dealt with a severe panic and anxiety disorder since I was a little kid,” says Elohim in a recent phone interview. She performs with Bahari and Mehro
at 6:30 p.m. on Tuesday at House of Blues. “I didn’t identify it until later in life. I felt incredibly alone. I still have moments when I feel alone. But now, it’s so amazing to have this community that has accepted me and opened itself up to me. I have this community I can turn to. Last night, I was feeling anxious and looked at messages on Instagram from people who have gone through what I have gone through. It’s the first time in my life that I know anyone who goes what I go through—this severe takes-over-your-life-and-you-cannot-control-it anxiety. I’m so grateful I opened up to them, and I feel so much love.”

Since making her debut four years ago, Elohim has also found a home in the community of electronic musicians who share her aesthetic. She’s collaborated with acts such as Louis the Child, Skrillex and Marshmello, and the deluxe version of her self-titled debut, a compelling mix of EDM and electro-pop, features remixes from Mija and Yoshi Flower.

“I was always drawn to weirder sounds,” she says. “That’s naturally where my ear went even though I grew up playing classical piano. I always thought the weirder the better. I love the ear candy weird sounds.”

“Aaron’s management showed him my music, and [he liked it], and we’ve become like brother and sister now,” says Elohim. “We grew up two miles from each other. We were both Southern California kids. We live close to each other now. We’ve become family. One day, I sent an a cappella version of [‘Flagpole Sitta’] to Aaron. He said he wanted to produce it. He absolutely killed it. I just added some live choirs.”

Elohim describes herself as “a one-woman show” and says she uses video to “make it feel even more interactive.”

“Since Day One, the [live] show has been very important to me,” she says. “I want it to equally visual and musical. The visuals are a big part of it. It’s very bright. You might want to wear sunglasses. I got to watch it from start to finish for the first time at the last rehearsals, and it’s really beautiful. It’s emotional and fun. There are three acts and it goes from fun to falling in love to this emotional catharsis when we can go crazy. It’s wild. It’s a whole experience.”