In Advance of Next Week's Show at the Agora, Japanese Breakfast's Michelle Zauner Talks About Her New Album and Memoir 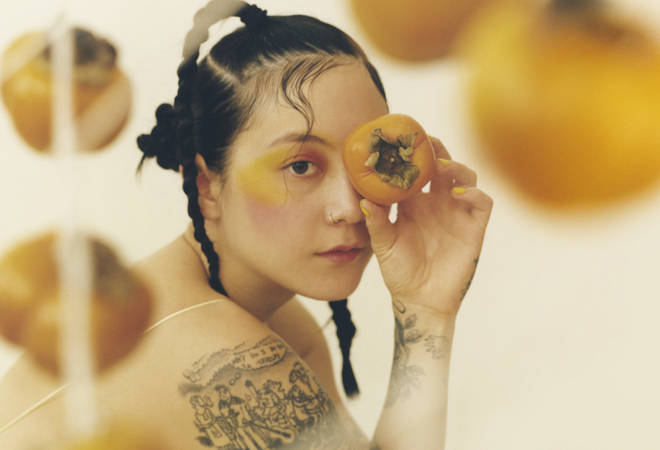 “I was always interested in writing since middle school,” the singer-songwriter says via Zoom from her Brooklyn, NY home. Japanese Breakfast performs at 8 p.m. on Thursday, Aug. 5, at the Agora. “I thought that in order to be a writer, I had to be a journalist. I was interested in journalism in middle school and high school.”

Though she wanted to form a band rather than attend college, Zauner did go to college and studied creative writing.

She refers to the experience as “life changing.”

“I learned so much about how to read and write,” she says. “Neither one of my parents went to college, and they weren’t particularly avid readers. I was exposed to a lot of I had never been exposed to before and that really resonated with me in a way that older texts from my high school curriculum didn’t. Those texts don’t hit you as hard. I liked reading Henrik Ibsen’s A Doll’s House, but there’s something that hits you differently if you read Philip Roth or Tobias Wolff or more modern contemporary writers. It draws you in in a different way and was really enchanting for me. I only got my undergrad. It was a real compromise for me to go to college, but my parents left me alone once I was there, so I could just do what interested me the most.”

Zauner played in a number of bands in college and would eventually form the indie rock act Japanese Breakfast in 2013. The band blossomed, catching Zauner by surprise.

“In 2016, I released my debut album on this small label called Yellow K,” she says. “I told [the label] I didn’t want to tour, and it was a waste of money for them to invest in press, and I’m glad they didn’t listen to me. That was the first record that caught on. [The indie label] Dead Oceans came on after that and released the record abroad and signed me to a three-album deal. I love them. They have great systems in place and great people who come to you with great ideas and connections and budgets for your dreams to get realized. It’s been a great experience for me.”

This year, the prolific Zauner released both a book (Crying in H Mart: A Memoir) and an album (Jubilee). She somehow managed to work on both simultaneously for the past few years.

“This book was five years in the making,” she says. “I was working on it for a long time, often on tour and in the car and on the plane and at soundcheck. It was just a long process. I submitted the rough draft in the summer of 2019 rough draft and from fall to winter of that year recorded the album and came book for final revisions through summer of 2020.”

For Jubilee, she sought out to expand her sound and make something more spirited and joyful than previous efforts. She recorded it at the Well, the same studio where she cut her previous effort, 2017’s Soft Sounds from Another Planet.

“It’s between a bedroom studio and a real studio,” she says of the Well. “It’s a warehouse studio. It’s my drummer and co-producer’s studio. I like that environment. A lot of times, I’ll be rearranging songs in the studio while we’re recording. If you’re thinking about a very expensive space, I think it could hinder my creativity.”

Album opener “Paprika” features spirited horns and strings, and a funky guitar riff drives the perky “Slide Tackle.” Even atmospheric tunes such as “Posing in Bondage,” a song with soft vocals and rattling percussion, simmer. The production overall has a Pet Sounds feel to it.

“I knew pretty early on that I wanted to call the album Jubilee,” says Zauner. “The palette was yellow and warm tones. My narrative as an artist has been rooted in grief and loss, and I thought the most surprising and unexpected thing I could do was to write an album about joy.”

“Be Sweet,” a songwriting collaboration with Jack Tatum from Wild Things, comes off as a particularly joyous synth-pop tune.

“That was one of the first songs I wrote for the album before I realized I was writing an album,” she says. “I was paired up with Jack Tatum in Los Angeles in 2018. We were collaborating on a pop song that wasn’t particularly for either of us. We thought we could sell it to some teenager. I ended up loving what we wrote together and wound up keeping it. It was some backpocket single for a really long time that I knew I had. Jack is a real sonic wizard and such a perfectionist, and he takes such a long time on very small details and making them perfect. I’m the total opposite of that and am guns blazing and blow through the wall. It was a good partnership. I came in with this synth line, and I showed him this Korean funk song, and he wrote this amazing bass line, and we were off to the races. It was one of those magical moments.”

Zauner admits “In Hell,” the one track that doesn’t fit the album’s mold, is a bit of an outlier.

“It’s maybe the most devastating song I’ve ever written,” she says. “On my first record, I wrote this song ‘In Heaven’ about my dog after my mom’s death. ‘In Hell’ is about that same dog and having to put her down a few years ago. This is a heavy, dark story. It was an intense moment for me to have that control that I didn’t want.”

The new songs are so lush and riveting, they’re bound to translate well live.

“I think it’ll be a blast,” says Zauner, who’s currently at work on a screenplay for Crying in H Mart. “We started rehearsals and have done some live sessions. We’ve added a saxophone player and a violin player. We’re a six-piece band now, and it makes you feel extra powerful when you have all these talented musicians. You’re a cog in the wheel, and you want to be a really proficient cog. I think it’ll be our best shows yet. We never rest on our laurels. We’re always trying to be the best band we can be. I really value that about my group, and I’m excited to bring it to the stage.”